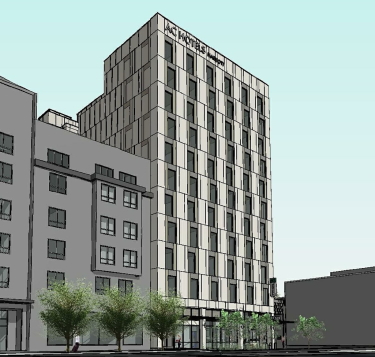 Rendering by Johnson Braund [enlarge]
The midblock site is walkable both to the Denny Triangle and South Lake Union.

What still looks to be an AC Hotel recently broke ground in South Lake Union, at 117 Yale Ave. N.; that’s the former site of Feathered Friends, near the REI flagship store. Ferguson Construction is the general contractor. Shoring and ground work is now underway by Kulchin Foundation Drilling, and Northwest Construction is also on the jobsite. Yale is now closed between Stewart and John streets to all but construction vehicles.