Ramp removal at the airport making way for more lanes 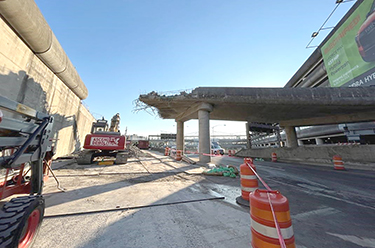 Photo from Port of Seattle [enlarge]
Scarsella and subcontractor Ascendent on Tuesday morning began removing the north end of the ramp.

Crews from Scarsella Brothers are in the midst of removing a ramp at Seattle-Tacoma International Airport that hasn't been used in over a decade. The job is the first of a two-part $79.3 million project that will widen the roadway into the airport in an effort to lessen congestion.

Scarsella this week is taking down the northern span of the ramp after removing the southern span last week. The final phase of demolition, planned for next week, will remove the remaining center section of the ramp. That work will require closing Arrivals Drive below the ramp from midnight to 8:30 a.m. on Monday, Tuesday and Wednesday.

Ascendent Demolition is a subcontractor to Scarsella on the project. Other team members are Puget Sound Traffic Control and HNTB (traffic design and design support).

The overall project will widen the southbound lanes of the Northern Airport Expressway from South 170th Street to the curbside drop off and pick up areas, as well as the main garage. The expressway will be widened by two lanes to create a six-lane roadway. The Port of Seattle says widening roadways that access Arrivals Drive and the main garage will help improve access to parking, the ground transportation center and curbside pick ups.

The original roadway was designed in 1968 to support an annual average of about 25 million passengers. In 2019, the airport averaged around 51.8 million passengers, causing significant congestion and queuing during peak times. The port says airport traffic in the future would eventually reach the interchange of Interstates 5 and 405 without the improvements.

The port has split the project into two contracts, with the first — called “early work” — involving the ongoing demolition of the fourth-floor ramp between Departures Drive and the main garage.

The second contract includes the roadway realignment, lane additions and utility system infrastructure improvements. This main work is expected to start about a year from now and finish in early 2026.

(Update: Scarsella's contract is for $1.8 million. Bids for the second contract are expected to go out in spring 2023.)

A YouTube video produced by the port explained that the ramp was originally built to support valet parking operations in the main garage, but was shut down over 10 years ago when light rail was extended to the airport and a passenger walkway built that crosses in front of it on the garage side. The ramp is in the way of adding one lane to the existing two lanes of Arrivals Drive.

Arrivals Drive now supports access to the ground transportation center for taxis, courtesy vans and other transportation network companies. The lanes also provide access for picking up arriving passengers and buses running to the Consolidated Rental Car Facility. With three lanes, Arrivals Drive will have one lane to the ground transportation center and two for picking up arriving passengers. The port also will move the rental car bus stop farther north, which should free up space for private vehicles picking up air travelers, and relocate and renew utility infrastructure impacted by this project.

Funding is coming from the Airport Development Fund and future revenue bonds. The port says no taxpayer money will be used.