Richard “Rick” Redman, who led Sellen Construction for many of his 34 years at the firm, died Sept. 30 in Seattle at the age of 79.

According to an obituary in The Seattle Times, Redman attended Blanchet High School, where he was a three-sport athlete and a high school All-America selection in his senior year in 1960. He was recruited to play football at the University of Notre Dame but chose the University of Washington, helping lead the Huskies to a conference championship and a Rose Bowl berth in the 1963 season.

Redman in 1965 was selected by the Philadelphia Eagles in the NFL draft and the San Diego Chargers in the AFL draft. He signed with San Diego, where he spent nine seasons and both played and coached the linebacker position, making the AFL All-Star team in 1967. In 1974, he played for the Portland Storm in the inaugural season of the World Football League.

After retiring from football, Redman returned to Seattle to join his stepfather, John Sellen, at Sellen Construction. Redman would become president, CEO and board chair at Sellen, helping the company build many notable projects in the Seattle area. 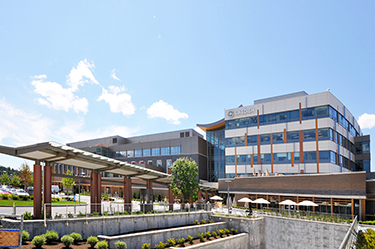 Photo courtesy of CollinsWoerman [enlarge]
Swedish/Issaquah Medical Center was voted the 2011 DJC Building of the Year in an online poll. It was built by Sellen Construction and designed by CollinsWoerman.

“Sellen's local projects include major campus additions at Swedish Medical Center and Seattle Children's Hospital; Hec Ed Pavilion, the Conibear Shellhouse and the Foster School of Business/Paccar Hall at the University of Washington; numerous cultural and civic projects including ACT Theater, Paramount Theatre, Seattle Art Museum and its Olympic Sculpture Park, the Museum of Flight, the Museum of History and Industry, and the Bill & Melinda Gates Foundation campus, as well as a number of office buildings for Amazon and Microsoft,” the obituary reads.

Sellen was on the team that won the 2011 DJC Building of the Year award, for the $360 million Swedish/Issaquah Medical Center.

The DJC in December 2014 wrote about a meeting of the Washington Chapter of NAIOP that featured “Tales from the Vault,” where leaders of local design and construction firms shared their stories. One of the participants was Redman, Sellen's chairman emeritus at the time.

The article said Redman was known for being highly prepared and that trait may have helped Sellen Construction win a contract to build the University of Washington bookstore.

“Redman went down to the site where the interviews were being held to scope out the space and check out his competition,” the DJC wrote. “While peering through rows of books, he spotted Howard Lease with his team (from Lease Crutcher Lewis) getting ready for their interview.

“Redman went straight back to his office and told John Sellen, who rarely attended interviews, that he needed to come too and start off the pitch by saying he would ‘be watching this project with great interest.'

“Sellen got the job, and Redman recalls being told the choice was between Sellen and Lease Crutcher Lewis. Getting John Sellen to the interview may have put them over the top.”

A celebration of Rick Redman's life will be announced at a later date.