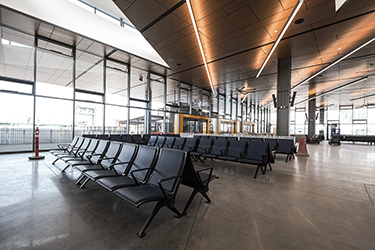 Photo from WSF [enlarge]
Those waiting to catch a ferry now have 362 seats in the expanded terminal building.

Ferry riders today will have a whole new experience at Colman Dock, as Washington State Ferries opens the remaining two-thirds of the new terminal building along the Seattle waterfront at Pier 52. WSF calls it the flagship of its ferry terminal buildings.

“Just in time for busy Thanksgiving travel, we are thrilled to welcome passengers on two of our busiest ferry routes into the completed Colman Dock terminal building and reach yet another milestone for the Colman Dock project,” said David Sowers, director of terminal engineering for WSF, in a statement. The dock serves the Bremerton and Bainbridge Island ferry routes.

The new building's north-south alignment is designed to provide better access to the ferry slips and make for faster passenger loading, as well as open up views of Elliott Bay and the city through 4,230 square feet of windows. The old building's alignment ran east-west.

Ferry riders now have 362 seats in the terminal — triple that of the decades-old original layout that used long benches. The 20,026-square-foot space provides room for 1,900 ferry riders and is adorned with scores of Stonewood panels on the ceiling and four triangular-shaped bays of clerestory windows that channel in natural light.

Other rider amenities include 12 turnstiles for each route, with six that are ADA-accessible, and four restrooms with 24 stalls. And, in the future, the terminal will have retail space at the north end and several kiosks for vendors.

About a third of the new building opened in 2019 to give construction crews room to work on other parts of the $467 million Colman Dock rebuild project while keeping the busy ferry terminal operating. It is being built by a joint venture of Hoffman Construction Co. and Pacific Pile & Marine, along with dozens of subcontractors.

In addition to the new terminal building, the dock rebuild includes a new concrete and steel trestle. The new trestle was a major element of the overall project, requiring the removal of 7,500 creosote-treated timber piles, installation of 500 steel piles and 772 precast concrete panels, and pouring of 12,000 cubic yards of concrete.

Construction has been ongoing for over five years and the project should be fully open in spring 2023. Remaining elements to be finished include an entry building on Alaskan Way and an elevated pedestrian connector to the new terminal building.

WSF is a division of the Washington State Department of Transportation. The agency recently made a video of the dock rebuild, which can be viewed at http://www.youtube.com/watch?v=dwLj_pv-3Lw .