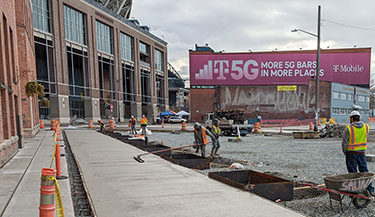 Photo by Benjamin Minnick [enlarge]
Salinas Construction crews on Monday poured a walkway that will be part of a landscaped pedestrian plaza on the former Railroad Way South near Lumen Field. The south plaza, where Salinas is working, is expected to open around March and the north plaza in August. Salinas has a nearly $3 million subcontract with Scarsella Brothers.

According to the latest employment data from the U.S. Bureau of Labor Statistics, the Seattle area added the third most construction jobs across the country over the past 12 months ending in October. The stats show the Seattle-Bellevue-Everett metro area added 11,000 jobs over the year, for a 10% gain.