Port puts out early notice on $1.4B airport renovation 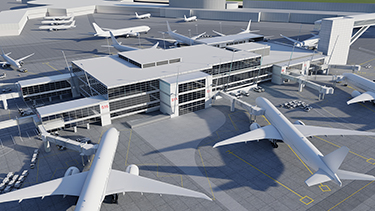 Images from Port of Seattle [enlarge]
In this early concept design developed by Port of Seattle staff, the renovated S Concourse keeps its pedestrian bridge connection (partially shown on the right) to the new International Arrivals Facility.

The Port of Seattle has some serious renovation plans for the S Concourse at Seattle-Tacoma International Airport — to the tune of $1.2 billion-$1.4 billion. This is the same concourse that international travelers pass through on their way to the airport's new International Arrivals Facility, another project that tipped the scales around $1 billion.

The port on Monday issued an advance notice for the project, highlighting six major contracting opportunities. This notice ran in the DJC: http://tinyurl.com/SouthConcourse .

The existing three-story building, formerly called the South Satellite, is comprised of seven levels, including several levels of subbasement. It was built in 1973 and expanded in 1984.

The project will renovate the estimated 200,000-square-foot existing space to meet current building codes while creating a destination for travelers. The recently vacated Federal Inspection Services and Customs and Border Protection areas (now at the IAF) will be turned into duty-free shopping, restaurants and other retail options. The concourse level will be reconfigured for more efficient circulation and may include a new central restroom. Finally, the penthouse level will be expanded to handle club and premium lounge spaces. Early designs indicate four new gate pods will have double duty as lateral and seismic supports for the existing building. The size of the addition hasn't been determined, as design work is in its infancy. 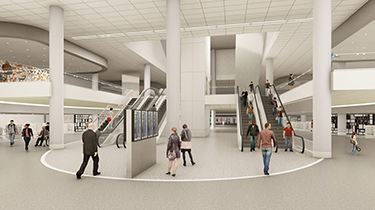 The port estimates this initial contract at $35 million-$45 million. Proposals are due Jan. 13. Prospective firms will be interviewed the week of Feb. 6 and a notice of intent to award will be given the week of March 13. The port wants to execute a contract during the week of June 5.

The port says it plans to use a project labor agreement. Project documents indicate that designs are now at 15%, with 30% expected in November 2023, followed by 60% in August 2024 and 90% in November 2024. When designs are at 90%, a maximum allowable construction cost will be developed.

A tentative schedule shows design work finishing in spring 2025, followed by the start of early construction work in summer 2026. Two phases of construction are planned, with alternating halves of the concourse closed during each phase. The first phase is expected to start in early 2029 and the second in spring 2031. All work is expected to wrap up by the end of 2031.

The port commission in late October authorized $100 million to fund the project to the 90% design phase. That came on top of a previous allocation of $2.75 million to get the project started. Funding will come from revenue bonds, airport revenues and federal grants.

The port has some other significant construction projects teed up for 2023, including an estimated $40 million relocation of Checkpoint 1 that could be out for bid in January; an RFQ for GC/CM firms for the third phase of baggage improvements, estimated at $300 million and advertising next spring; and RFQs for design services and GC/CM firms for the $800 million Main Terminal improvement project, advertising next summer.