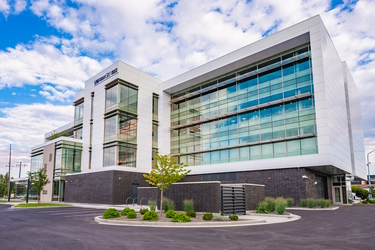 Photo courtesy of McKinstry [enlarge]
The facility is part of Emerald Initiative’s mission to create a medical cluster in the heart of Spokane.

“Working together,” said UW President Ana Mari Cauce at the time, “we are creating better access to health care for the patients and communities in Washington who need it most.”

This was a big project — with even bigger ramifications for Spokane's burgeoning life sciences industry.

McKinstry and its independently owned affiliate Emerald Initiative, a real estate developer, immediately set out to put together a design-build and ownership team that could deliver the project in a way that was befitting such a grand vision. Conditions of satisfaction were developed around “big creativity,” and included statements like “build the best building available”; “prefabrication and manufacturing with a mindset to deliver modular, scalable, and replicable components”; and “a fully integrated team including all design, construction, and ownership representatives.”

Here's what we learned about building a healthy project team:

• A truly integrated project team starts with the right people, the right mindset, and an understanding that, while every idea from an individual might fail, an idea and solution from the team will always succeed. And with many of us already working from a Lean Project Delivery mindset, we felt we had a good foundation to start with — and the right players at the table.

• You need to know the goals. Our team spent roughly three months in the validation process through Target Value Delivery. With design help from architecture firm CollinsWoerman and McKinstry, Bouten Construction developed a target budget that aligned with the scope of the project, resulting in a guaranteed maximum price set at nearly 15% below the target budget originally developed.

• Alignment is critical. Every member of the team came to the project with great ideas. And none of them made it through. Instead, the team spent time brainstorming, fast-failing ideas as quickly as possible in order to spend more time on what we believed would be the right solution. Once we all agreed on a particular solution to proceed with, it was a 100% focus on making it happen. Alignment across the entire team kept the momentum positive and the project moving forward.

• It takes dedication and commitment. In order to understand what would “build the best building available,” the project team spent nearly six months evaluating the exterior envelope system in conjunction with the building mechanical systems. Not only did this effort not slow down any progress on the project, but it also actually sped along the final design, outpacing more traditional delivery methods. After spending so much time evaluating its options, the team was completely aligned on — and committed to — the right match.

• Everyone needs to be flexible and adaptable. As much as we in the construction industry attempt to anticipate every possible situation throughout the course of a project, we all know that things rarely, if ever, quite work out according to plan. Our team knew that the ability to adapt quickly to change — while staying aligned with the conditions of satisfaction — would be of benefit to the project as a whole. It was only by fully expecting failures along the way, in fact, that we could get back on track with a better solution while maintaining forward momentum.

• Accountability is key. Project teams, no matter how well organized, often struggle with timely information: who has it, who needs it, and who is best positioned to put it into action. Our solution? Hold each other accountable. It sounds simple, but once a commitment was made, no one wanted to let down a teammate they knew was relying on them.

• Having fun is important, too. The project began in pre-COVID times; it broke ground in September 2021 in the midst of a global pandemic. (Looking back, it's a little ironic that we were building a new home for medical education and research as cutting-edge vaccines were being developed and administered in record time.) By the time we'd completed the facility, things were very nearly back to normal. While COVID certainly put a damper on the fun and camaraderie we enjoyed when the project started, it's precisely because of that foundation we'd built early on that enabled the team to persevere.

So what was the outcome?

To take just one example, it was close collaboration that helped determine the appropriate blend of energy-efficient envelope and MEP system options, all while staying within the confines of the overall project budget. This sort of data-driven, iterative process requires an incredibly open-book, collaborative, and true partnership-oriented project approach, which proved to be a hallmark of this project team.

What's more, the project came in slightly ahead of schedule and slightly under budget. That's unusual in and of itself, but even more impressive considering it was built during COVID.

Innovative outcomes like these are only possible with a visionary and ambitious developer-owner, flexible and innovative design-build partners, and equally bought-in tenants.

And we think it's just the start: The Inland Northwest is fast becoming a hub of life sciences innovation, spurring regional growth through collaboration between academia, industry, and the medical community.