Union to get TBM for new training program 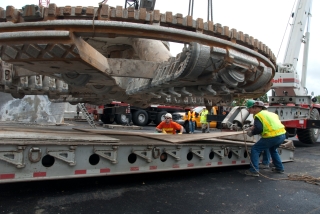 Vinci/Parsons/Frontier-Kemper, one of the joint ventures boring tunnels for King County's Brightwater wastewater treatment project, is donating most of the tunnel boring machine “Helene” to the Northwest Laborers-Employers Training Trust Fund.

The construction training program will use the TBM for a new class on bored tunnels that is expected to kick off this fall at its Satsop facility in Grays Harbor County.

Mike Warren, training director of the training trust, said the class will be the only one of its kind in the country.

The main bearing of the cutter head is expected to be shipped back to Herrenknecht. Warren said that's fine because Helene will be used as a prop to teach students how TBMs are laid out. “This will not be an operational TBM,” he said. “It will be as close to a real-life scenario as we can get.”

The cutter head on Tuesday was extracted from a tunnel portal in Bothell and trucked to Satsop. The remaining pieces are being trucked throughout the week during low traffic periods.

The training trust is adding the tunnel boring class to its SHAFT (Safety Hazard Awareness for Tunnels) program. 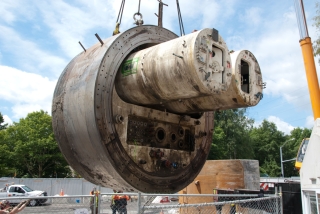 Photo courtesy of WALECET [enlarge]
Manlocks control atmospheric pressure for workers needing to access the TBM’s front end. They were part of the donation.

Warren said students won't be digging any tunnels in the new classes, since the TBM won't be operational and it will be located above ground for safety reasons. Instead, they will get classroom sessions mixed with hands-on training with the TBM to simulate how the machine works.

Donations of tunnel components are coming from King County and the Washington Laborers-Employers Cooperation and Education Team. The county is providing 100 feet of concrete tunnel wall segments while the trust is contributing 100 feet of ring steel and wood lagging.

“If we had to buy everything, then we wouldn't have the props in place,” Warren said.

The training trust won't be able to use the cutter head right away because the county is preserving it for a lawsuit it filed against VPFK, which took nine months to fix the machine after it broke down in May of 2009, causing delays to Brightwater's tunneling operations.

Warren said the county may do its investigation of the cutter head before any more deterioration takes place, but he didn't know when his organization would be able to use it.

“That raw steel is not going to stay shiny very long, regardless of where you store it,” he said. “I'm sure they will want to do it while it's fresh out of the ground.”

Warren said trust students will make a concrete cradle for the shields to rest on during an upcoming class. The cutter head will be eventually welded onto the shields.

The Satsop site was to be a nuclear power plant before it was mothballed in 1983 after about six years of construction and then cancelled in 1995. Warren said the site has two 12-foot-diameter tunnels that run 1,400 feet from the cooling tower to the old reactor building and the training trust is looking at how they could be used in the SHAFT program.

“There's a lot of work we have to do in order to use that part of the facility,” he said. “It's going to be very exciting when it's all done.”

Warren said it could take two to three years to put it all together.

“It's new, we're trying to take small steps to make sure it's a quality product when we get done,” he said.

For now, tunnel boring classes focus on shaft training and rail installation and maintenance. Tuition for the five-day SHAFT program is $855.

Tunneling classes are a small piece of the mission of the training trust, which has provided construction classes since 1968. The program last year trained more than 5,600 people at locations in Kingston, Satsop, Pasco, Spokane and Utah.