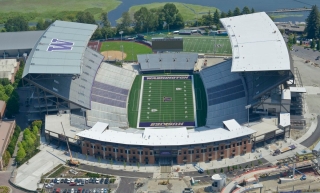 After more than a year of preconstruction services for the University of Washington Husky Stadium renovation project, Turner Construction Co. began construction in November 2011.

The new stadium has 70,000 seats and 30 new suites, including luxury and patio suites. It also has new club seats, a press box, 80,000-square-foot football operations building, new concession stands and restrooms, a commercial kitchen and landscaping.

For the first time in its athletics history, the UW chose a developer-driven model for construction. The university awarded the work in August 2010 to Wright Runstad & Co., who teamed with 360 Architecture, Magnusson Klemencic Associates and Turner. 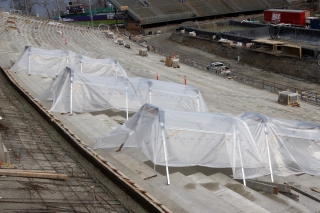 Photo courtesy of Turner Construction [enlarge]
Crews used a portable tent system to move up the seating bowl as concrete pours were made to ensure weather wouldn’t impact the pour schedule or concrete quality. Turner also served as the concrete subcontractor.

There were benefits to the UW for using the developer-driven model versus a typical capital projects approach. One of the biggest was that subcontractors could be selected based on qualification and value rather than the lowest bid. Through this process the contractor was able to work with the developer and owner to select key subcontractors. A group of these “partner subcontractors” even participated in the proposal process.

Building these partnerships early in the process allowed for immediate planning, coordination and budget establishment.

The other benefits for UW Athletics were:

3. Flexibility in choosing the right partners.

The project was awarded in August and by October the team was fully integrated into planning, coordinating and designing. While finishing up preconstruction in summer 2011, Turner was able to mobilize on site and complete underground utility work early. Execution of this work set the stage for an August 2013 completion by allowing Turner to begin critical path work on day one of the master schedule.

Keeping on the critical path throughout the project was accomplished by the entire team using a variety of lean processes.

Working together to promote a clean and efficient construction site was instrumental in meeting the rigorous schedule. By embracing lean principles, Turner cut time, labor and material usage across the board, creating savings that could be put back into the project as improvements.

Weekly pull-planning sessions with the subcontractors allowed Turner to anticipate and work through potential conflicts prior to beginning work in the field.

Collaboration between the trades on how to efficiently prefabricate, share work, and put it in place helped Turner ensure work would be completed on schedule. This proactive approach also kept the team focused on providing innovative solutions in order to get the highest quality outcome for the stadium.

The result? Nearly 1 million hours were logged without a lost-time injury.

Another of Turner's lean contributors was an “everything on wheels” approach. In a large project with hazardous conditions, having everything on wheels allowed crews to move heavy materials to keep paths clear and materials easily at hand. It also allowed for orderly and clean storage of materials.

As the concrete subcontractor, Turner was the largest presence on site. Having control over the concrete cast-in-place seating bowl contributed to its ability to control the schedule and lead by example in safety and quality. The concrete team developed a portable tent system to move up the bowl as pours were made to ensure that typical Seattle weather did not impact the pour schedule or concrete quality.

Husky Stadium renovation is not the only construction project near the busy intersection of Montlake Boulevard and Northeast Pacific Street: Sound Transit's UW Station and the Rainier Vista pedestrian bridge projects were also under construction. Coordination from an early stage was a key in allowing all projects to proceed without disrupting each other.

Along with ensuring Turner was being proactive in communication with its construction neighbors, the project team made it a priority to accommodate UW Athletics operations during construction. Turner worked with the university to maintain access to the football practice field and softball field during construction. Some work was held back to avoid interference with practice days and certain times of the season.

The Husky Stadium renovation was a monumental project. It is a project built for the fans to enjoy for generations to come. Project success was due to the team's dedication to safe, collaborative and innovative solutions and, most importantly, to working together.

Chuck Baldwin, Turner Construction project executive, has 35 years of industry experience. He has focused his career with Turner on building world-class sporting venues.