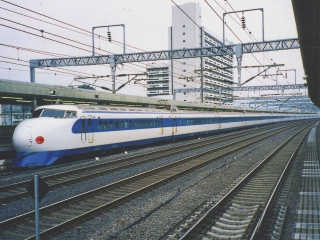 Photo by Cassiopeia_sweet (1993) [enlarge]
Japan’s first bullet train was the Shinkansen O series, which started running in 1964 and could hit 130 mph.

TOKYO — It was, retired Japanese railway engineer Fumihiro Araki recalls, “like flying in the sky.”

Zipping cross-country in a super-high-speed train has become commonplace in many countries these days, but it was unheard of when Japan launched its bullet train between Tokyo and Osaka 50 years ago Wednesday.

The Shinkansen, as it's called in Japan, gave a boost to train travel in Europe and Asia at a time when the rise of the automobile and the airplane threated to eclipse it. It also was a symbol of pride for Japan, less than two decades after the end of World War II, and a precursor of the economic “miracle” to come.

The Oct. 1, 1964, inauguration ceremony was re-enacted at Tokyo Station on Wednesday at 6 a.m., complete with ribbon cutting. The first bullet train, with its almost cute bulbous round nose, traveled from Tokyo to Osaka in four hours, shaving two and a half hours off the 319-mile journey. The latest model, with a space-age-like elongated nose, takes just two hours and 25 minutes.

Araki, now 73, drove the Shinkansen briefly in the summer of 1967 as part of his training as a railway operations engineer. Last week, he slipped back in time as he sat in the driver's seat of one of the early model bullet trains at a railway museum outside of Tokyo. He pulled a lever on the control panel, looking straight ahead as he was trained, though all he could see were other museum exhibits.

“It was like flying in the sky, it was that kind of feeling,” said Araki, the acting director of the museum. “On a clear day, you could see Mount Fuji, and riding atop the railway bridge at Hamanako lake was very pleasant. It felt like you were sailing above the sea.”

Japan started building a high-speed line during World War II, but construction was halted in 1943 as funds ran out. The idea was revived in the 1950s, but many questioned undertaking such a costly project, particularly with the expansion of air travel and highways.

Criticism turned to pride when construction, financed partly by an $80 million World Bank loan, was completed in time for the Tokyo Olympics in October 1964.

The government subsidizes the construction of Shinkansen lines, but the operations are the responsibility of the private companies that run the trains, said Christopher Hood, the author of “Shinkansen: From Bullet Train to Symbol of Modern Japan.” They are generally profitable, though the companies don't break out the Shinkansen operations in their financial results.

The first Shinkansen had a maximum speed of 130 miles per hour. The fastest trains previously, in Europe, could reach 100 mph. Today's bullet trains, in Japan and elsewhere, have reached and in some cases exceeded 186 mph.

By average speed, China has the fastest train in the world, averaging 175 mph on a route between Shijiazhuang and Zhengshou Dong, according to a biennial World Speed Survey by Railway Gazette.

The Shinkansen renewed interest in high-speed rail elsewhere, notably in Europe. France and Spain are among the leaders in Europe, and Turkey last year became the ninth country to operate a train at an average speed of 125 mph, according to Railway Gazette.

The United States is an exception, though there are proposals to build lines in California and Texas. The fastest train in the U.S., Amtrak's Acela Express, averages 105 mph on a short stretch between Baltimore and Wilmington, Delaware, the speed survey says.

Magnetic levitation. Shanghai launched a German-built maglev train in 2004 on a 19-mile route between the city and the airport. It can hit 267 mph. A Japanese maglev train in development has topped 310 mph in tests. If built, it could reduce the travel time between Tokyo and Osaka to just over one hour.

With speed, though, some of the romance is lost. A faster Shinkansen has eliminated its dining car.

“The problem is that Japan is such a small country,” said Araki, the retired engineer. “If you go too fast, you'll get there in no time. No time to enjoy an on-board meal.”