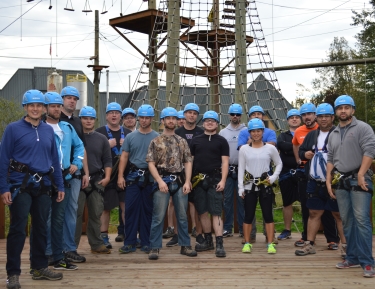 Photo by Victoria Klyce/ABC [enlarge]
The first group in the Rising Star program did team-building exercises last year at Adventura, an adventure park in Woodinville.

So when board members of Associated Builders and Contractors of Western Washington struggled to identify leaders within their own organizations, they decided to start making some.

ABC's next move was to develop a program called Rising Star, a six-month course for developing executive leadership skills.

The program kicked off in 2015, and is about to begin its second year.

“We really wanted to offer something that gives people the soft skills they need to be successful in the industry,” said Victoria Klyce, vice president of communications and events at ABC.

Greg Tozer, vice president of operations at Synergy Construction, designed the program, drawing on his experience in construction and as a U.S. Army Ranger.

He adapted a widely taught set of 11 leadership principles he first learned as a Boy Scout and encountered again in the Army.

“The skills are simple. They include everything from communication to effective teaching to counseling,” he said. “When you put all 11 together, it makes for a very powerful leader.”

Young people have fewer opportunities to acquire and practice leadership skills than they did in the past, Tozer said.

And leadership demands are greater today than they used to be.

“Thirty years ago, all you had to do as a superintendent was to bark, yell and scream,” he said. “That doesn't work anymore.”

The program runs from September to March. Students meet at ABC's office in Bellevue for three hours every other week to explore topics such as “leadership defined and skills required,” “controlling the team” and “setting the example.”

Students hear from a variety of instructors and guest speakers.

Sprinkled amid the classroom sessions are networking mixers and team-building exercises. One of the sessions is at an adventure park in Woodinville, where visitors tackle obstacle courses.

Students also work together on a community service project that allows them to put their new leadership skills to work. Last year, they worked with Farmer Frog, an urban farming nonprofit that teaches people how to grow their own food. Activities included building hoop houses and goat fencing.

At the end of the course, graduates invite their bosses to celebrate at a local pub — and perhaps serve them notice it's time to start looking over their shoulders.

The Rising Star program accepts 20 students each year. All must be ABC members.

Klyce said that given the time commitment it's important for students who enter the program to have the full support of their employers.

Good candidates, she said, “want to learn more about the construction industry and gain skills to help their careers.”

Most students last year were nominated by their employers. If there are more candidates than available openings, an ABC committee decides who gets in.

Klyce said most of the students in last year's group were project managers and estimators. But the group also included a couple of accountants and a carpenter foreman. Some companies sent as many as three employees.

Tozer said that for his classes he broke up his students into small groups, where they could assume a variety of leadership roles.

When students “learn the skills and know the skills, they can start practicing them,” he said. “You get stronger every time you use them.”

Tozer said he saw his students blossom over the course of the program.

They entered “meek and sitting in the corner,” he said, “but by the end of the course you'd think they're all in charge.”

Mike Yore, a project manager and estimator at Olympian Precast, said taking the class was a positive experience.

“You go over a lot of different ways to work with a group, lead a group and communicate with people better,” he said.

His advice to other students is to “make sure they are willing to stick to the program.”

“It's a challenge because it's over six months,” he said, “but if you commit, you will get a lot out of it.”

Klyce said ABC received plenty of useful student feedback after the program's first go-around last year, including calls for more time to spend with each other after class.

So this year, there's more social activity built into the schedule, and students under 40 will be enrolled in ABC's national Young Professional Group, where they can network with peers.

All students also get a free six-month membership in ABC's Toastmasters chapter, where they can polish their speaking skills, and an ongoing mentorship with a current ABC board member.

The enrollment deadline for this year's program is Sept. 15. The registration fee is $499. More information and registration is available at http://bit.ly/2bWzQva.

Klyce said ABC is developing a “Leadership 201” version of its program so Rising Star graduates can continue honing their skills. The program would also focus on technical abilities that are specific to construction.

Tozer said he will remain involved with the Rising Star program to help maintain its standards and consistency.

Construction “has been a great career for me,” he said. “What I hope to see is more young men and women in the industry step up in the (leadership) role and take it seriously.”