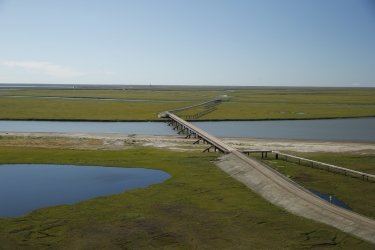 Locked in a race against time and the elements, PCL Construction recently fought some of the greatest challenges on a $100 million transportation project.

PCL project director Ankur Talwar said the team consisting of PCL, CH2M and Ruskin Construction spent two grueling winters in 2014 and 2015 on the North Slope of Alaska building two bridges. The project, he said, was as much an engineering feat as it was a feat of execution.

“At any given time, we had 30 to 40 staff professionals needed to feed the beast,” Talwar said. CH2M helped support the more than 400 workers by keeping equipment fueled and running around the clock.

Fighting the constant threat of a winter “blowout” — whiteouts that regularly shut down all construction — Talwar said “feeding the beast” meant addressing construction challenges such as keeping a large array of cranes, trucks and other bridge-building equipment running smoothly during the two four-month construction seasons.

The result was the safe completion of the 1,400-foot-long Nigliq Channel Bridge and the nearby 250-foot-long L9323 Bridge, both designed by PND Engineers of Anchorage for ConocoPhillips.

The bridges are an essential component of ConocoPhillips' strategy to access oil and gas resources in the 23 million-acre National Petroleum Reserve Alaska. The Nigliq Channel Bridge can handle oil field vehicles weighing up to 175 tons and support six pipelines along its downstream side, protecting the pipes against ice floes up to 6 feet thick and 200 feet wide. Its substructure was designed with slanted ice breakers to reduce ice loads.

The bridges also were the first and longest “launched” bridges constructed in North America north of the Arctic Circle, according to PCL.

Seattle-based Talwar said he visited the site every two weeks during construction to support the project team by performing safety audits and connecting with workers. 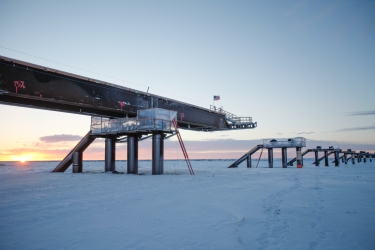 The severe wind and snow blowouts meant that the construction team planned for and scheduled five to 10 non-work days each month, as temperatures dipped below minus 50 degrees Fahrenheit. Adding to the climate severity was a lack of daylight, as the region sees only a few hours of daylight each day in the winter.

“There was heightened awareness around safety,” Talwar said. “The safety culture was strong — and workers were oriented in Anchorage for a week before arriving at site. To protect workers, safety and planning meetings were held in a large heated facility where workers gathered before and after every shift to discuss hazard identification and mitigation. There's no doubt the weather conditions were so extreme and had the potential to impact work, that intense safety management and planning was needed.”

PCL teamed with the Colorado structural engineering firm McNary Bergeron and with CH2M. McNary Bergeron provided its bridge launching expertise and CH2M provided logistics for working on the North Slope.

A key criteria in Conoco-Phillips' selection of PCL was the proposed launching technique for quicker bridge construction, Talwar said. The bridges were pre-constructed in the Northwest in sections, and then shipped to the construction site.

“Rather than being dependent on weather, and use multiple cranes working off the ice pads across the river, we assembled each section of the bridge at the abutments and used hydraulic rams to launch each section across nine pier locations — eliminating the need for ice access to facilitate the construction,” Talwar said.

The process, he said, also reduced the construction's environmental footprint.

The steel manufacturers for the project were Jesse Engineering of Tacoma and Fought & Co. of Tigard, Oregon. The precast panels were made by Concrete Tech of Tacoma, with the majority of the bridge elements barged or trucked to Alaska.

“At any given time, we had four to five operations underway,” Talwar said. “We had two or three operations working on the foundations supported by a large crane, and once the piers were built we had additional operations to assemble the steel, erect pier caps and prepare for launching.”

Kenton Braun, vice president of PND Engineers in Houston, said the “extreme environment” presented unusual challenges, and planners also faced a complicated seven-year permitting process. Braun was the engineer of record on the bridge and his firm provided technical design and assistance during construction. 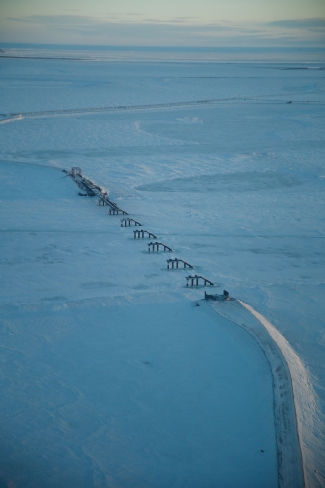 Photo from PND Engineers [enlarge]
The construction site got down to minus 50 degrees Fahrenheit.

“Because of the varying levels of frozen and unfrozen soil, salinity concentrations in the soil and inconsistent presence of water, each of the bridge piers had to be individually designed to accommodate the specific conditions at that site,” Braun said. “The design also had to ensure that all foundations could be constructed within the first three-month ice road season to accommodate the bridge launching.”

The barge deliveries from Tacoma were tugged to Valdez and then trucked 1,300 miles to the jobsite.

Talwar said the construction season so far north has to be timed perfectly with the coldest part of the year, when ice roads could be built and maintained — typically from mid-January to late April.

“In those months, the ice is thick enough for us to run the cranes and the trucks and to do the staging,” he said. “Since we had only two seasons to build the bridges, our team of 400 craft workers and 60 office staff worked around the clock.

One of the most essential jobs was logistical and supply planning, according to Talwar. Just to get to the nearest Home Depot, he said, would involve two flights or a 500-mile drive.

“Because you have such a limited season, you have to carefully plan deliveries,” he said. “There is no going to Home Depot for work gloves and lumber. All that has to be pre-planned and delivered at the start of the construction seasons.”

All that hard work paid off — Nigliq Channel Bridge last month was ranked second in the Top 10 Bridges for 2016 by Roads & Bridges Magazine.