As the search for qualified workers drags on, a local mechanical contractor has a few secrets 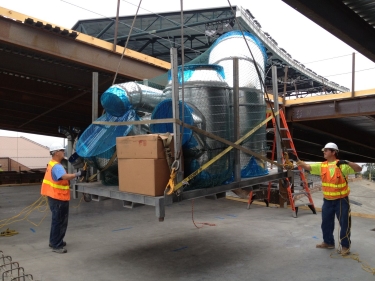 Photo from PSF Mechanical [enlarge]
PSF Mechanical installed HVAC equipment for the Husky Stadium renovation, completed in 2013. The firm is competing to add staff amid a local building boom.

It's no secret that construction firms around the country are struggling to find experienced employees.

In a nationwide survey of contractors, 82 percent of the respondents said they expected it will become harder or remain difficult to recruit and hire qualified workers this year, up from 76 percent in 2017.

Among firms in Washington — where there has been a tech-fueled building boom — a whopping 85 percent said they thought it would be a challenge to find workers to hire this year.

The survey was released earlier this month by the Associated General Contractors of America and Sage Construction and Real Estate.

Still, hiring needs continue to climb. In the AGC survey, 83 percent of in-state contractors said they expect to add to their headcount in 2018.

Ken Simonson, chief economist for AGC, commenting on the survey results, noted that while contractors “think the overall market is going to expand, I think they see it as a challenging year to find the workers and to win the contracts.”

Firms under pressure to bulk up their staffing are addressing the need in a variety of ways, such as increasing base pay, adding training or improving benefits.

One local firm, PSF Mechanical, has found its own formula for staffing success.

The Seattle-based mechanical design-build contractor announced it just hired its 350th employee, and plans to hire more in the run-up to a busy spring.

Traci Staffen, PSF's marketing manager, said the company has been hiring at a steady clip for the past several years and its needs are split evenly between corporate and field positions. Around a third of its staff is corporate.

It's hard to find field labor, too, she added. “Everyone is feeling the pain.”

One problem contractors continually face is maintaining appropriate staffing levels since big plans can get upended at a moment's notice.

“You have to work hard to anticipate those possibilities so you don't have lulls,” she said. “People make a mistake by not anticipating those type of things.”

Workers who are laid off when projects vaporize sometimes have to be recruited back later.

The company finds its employees by casting a wide net. It relies on employee referrals, word of mouth, social media, and job-posting sites like Indeed, Monster and Glassdoor.

PSF also recruits on college campuses and among veterans leaving the military. The company endows scholarships for the construction management and mechanical engineering programs at Washington State University and the University of Washington. And it advertises on Orion Talent, which connects employers with military vets.

Even competitors can be a good source for new hires — no poaching required.

“We all know each other,” Staffen said. “When we have a hole to fill, we can call and say ‘Do you have anybody who's not busy over there and looking to make a change?'”

Once PSF has hired new staff, the company works to keep them around. New employees get a bonus after 90 days, and company culture is a source of pride.

“People tend to be very happy here,” said Staffen, who joined PSF in 2006. The company is celebrating its 120th anniversary this year.

“We have people that genuinely like what they're doing and work well together,” Staffen said.