Tower cranes 101: Here's how they put ‘em up and how they take ‘em down 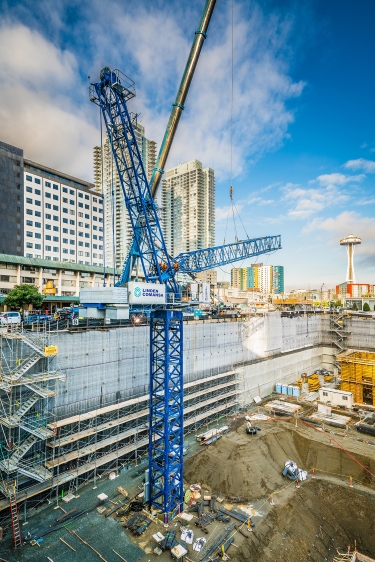 Without tower cranes, it's likely that many iconic buildings and structures we know and love would not be standing. Not only do these steel giants look striking, they are also integral to modern construction and development.

Tower cranes are the go-to tool used to bring even the largest and grandest construction projects to life. To help you develop a better understanding of how these mammoth machines do the seemingly impossible, we've outlined the key mechanisms that make tower cranes work.

There is an abundance of tower cranes in cities. So much that you may be fooled into believing that they reach sky-scraping heights with ease. In reality, erecting a tower crane takes weeks of prior preparation.

To make the erection process as efficient as possible crew members typically stick to a predetermined set of sequences. Assembly procedures differ depending on the type of tower crane used. Broadly speaking, tower cranes typically fall into general categories of either luffing jib or trolley jib types.

We've outlined the assembly process for a freestanding trolley jib tower crane as these are some of the most commonly used tower cranes nationally.

The process of erecting a crane begins with creating a secure foundation from which the structure will be built upon. The integrity of the base is crucial in supporting the crane's structure and balance for assembly and operation.

Prior to the crane's arrival on site, the first piece of the vertical mast is secured to a concrete foundation using heavy duty anchor bolts or embedded stools. The exact quantity of concrete needed will depend on various factors including the configuration of the tower crane and the local code requirements, but the entire weight of the base usually exceeds 400,000 pounds.

The next order of business is the transportation of the equipment to the work site. This may sound simple enough, but for the crew many factors must be taken into account.

• Transportation budget. To transport the parts of the tower crane, heavy hauling services are required. This will incur additional costs.

• Transportation routes. Road routes and travel times are restricted when hauling loads over a certain weight or dimension.

• Transportation schedule. Transportation of equipment requires precise coordination to ensure the tower crane components arrive on site in the order needed, along with any additional equipment needed for assembly. 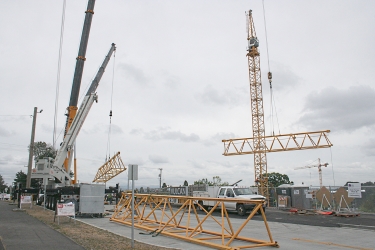 The tower crane will arrive on site in multiple parts.

First, the vertical mast is erected by adding mast sections on top of the base using other types of lifting equipment, such as mobile or crawler cranes.

Once the desired mast height has been reached, the operator's cab and a turntable, which provides rotation, will be placed and secured atop the lengthy mast. This section is usually the heaviest element of a tower crane. The apex of the crane is then attached — aptly named the tower top.

A working arm or jib is connected to the turntable and extends horizontally. Attached to the jib is a trolley mechanism, hoist and hook. These provide the various functions needed for lifting.

Behind the cab and in alignment with the working jib is the counter-jib. This section contains counterweights, motors and electronics. For the tower crane to become functional, ropes must be attached and connected to the working elements.

Most cranes are designed to be operated from the cabin at the top of the crane. For efficiency and safety, a team of skilled individuals are employed to oversee the operation of the crane.

Each member of the team resumes responsibility for various processes. For example, “the appointed person” has a range of duties including assessing risk and managing the overall planning of the lift. A “crane coordinator” will schedule the lifts, manage sequencing of the lifts and ensure clashes do not occur. A “signal person” acts as the operator's second set of eyes and communicates to the operator which direction to move the load.

The crane operator, obviously, is responsible for operating the crane and lifting/positioning loads as required and directed by others.

The basic steps to dismantle a tower crane are the same as assembly, just in reverse order.

However, it must be considered that when a tower crane is erected, typically the jobsite is mostly empty as the primary structure hasn't started. When it comes down, the opposite is true as the completed structure usually occupies most of the available space on the site. Hence, with limited room to setup a mobile crane or set the tower crane components down, dismantlement is often a far more complicated task.

This article originated as a blog post by Maxim Crane Works, a provider of crane rental and lifting services with over 50 locations across the country, including Seattle. It was edited for content and clarity.