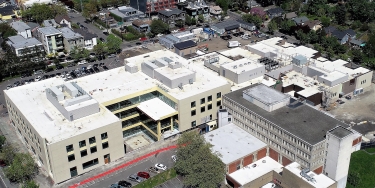 Photos from King County [enlarge]
The Children and Family Justice Center project is more than 80% complete. 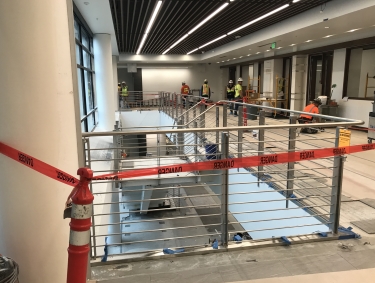 [enlarge]
At the justice center, the overall apprenticeship participation rate is 26%.

Apprentices are playing a significant role in construction of the Children and Family Justice Center at 12th Avenue and Alder Street in the Squire Park neighborhood of Seattle.

Twenty-six percent of the workers on the $242 million King County project are state-registered apprentices, doing jobs such as carpentry, plumbing and electrical, the county said.

The county's apprenticeship program, established in 2004 to foster opportunities for good paying careers in the industry, with a certain percent of those jobs filled by women and minorities, said Ken Guy, director of finance and business operations for the county.

King County requires a percentage of labor hours to be worked by apprentices on most of its public works construction projects. It also has “aspirational goals” for minorities and women on those jobs, and contractors tend to comply with them, said Samantha Kealoha, labor equity program manager for the county.

“It doesn't matter what you look like to get into the industry,” she said. “They just need the workers.”

Guy said contractors are required to comply with a community workforce agreement on county public works construction projects of $15 million or over. As part of that agreement, the county requires a certain percentage of construction workers to be from economically disadvantaged areas.

For example, that agreement is in place on the county's $32 million solid waste project at Cedar Hills Regional Landfill; the $36 million wastewater project at Sunset and Heathfield pump stations; and the $96 million Georgetown Wet Weather Treatment Station project.

The Justice Center project has a similar, but different, agreement. There, more than one-third of all apprentices are people of color, and women comprise 8% of the apprentices.

A King County program sets minimum requirements for small contractors and suppliers on most all of its public works construction projects, said Guy. Such firms are providing services and goods representing 17% of the dollar value the construction contract for the Justice Center, he said. The contract with Howard S. Wright, a Balfour Beatty company, is for $178 million.

“If you look at the history of the construction industry, it's been historically a white male dominated industry,” but the county is trying to ensure that the workforce reflects what the community looks like, he said.

Guy said the apprenticeship program works at the Justice Center project because the county has a good partnership with labor unions, the contractor and community groups that help recruit apprentices.

In 2016, the county, city of Seattle, Sound Transit, Washington State Department of Transportation and Port of Seattle formed the Regional Public Owners group to promote construction apprenticeships because they anticipated a worker shortage given the large number of public infrastructure projects in the area, he said. “There's no way we could build these projects without this skilled workforce,” Guy said.

From 2018 to 2022, the Puget Sound region is expected to have an average of 14,400 fewer construction workers each year than it needs for public and private projects, according to a report from consulting firm Community Attributes.

That figure is based on a construction worker putting in 1,500 hours a year, the typical maximum for public projects, according to Kealoha. It did not account for hours worked on private projects in determining the gap.

To help fill the labor pipeline, the county contracts with pre-apprenticeship construction programs that recruit people to work in the industry and introduce them to the trades, said Kealoha.

Kelsey Sparks graduated from the Pre-Apprenticeship Construction Training program at Seattle Central College. Then she took the qualification test with the Painters Union (Local 300) and scored 96%, which would have qualified her to become a union member, she said. But Sparks said she was offered a better job as a field enforcement specialist with Seattle-based Intelligent Partnerships.

Sparks said she ensures that contractors and unions comply with the project labor agreement, a pre-hire collective bargaining agreement that establishes basic terms and conditions for labor on projects. She is monitoring the PLA on the Justice Center.

“I love what I do,” she said. “I am fighting for the underdogs. A lot of people are not educated about their rights and what's supposed to be given to them'' in wages and working conditions.

Sparks said she has had eight concussions from playing basketball and two bad car accidents — and working with her hands is therapeutic. Besides, said Sparks, who started out playing basketball on an all-boys team, “I've always felt I had something to prove for myself: No matter what my sex is I can do things like anyone else.”

She said she is motivated by her mother — her biggest supporter and the person who helped shape her character and how she treats others.

Apprentices receive on-the-job training and classroom instruction in skilled trades. Contractors pay them and also pay so many cents per hour that apprentices work into apprenticeship programs, typically run by unions, said Kealoha.

“They wish that everyone would do it even on private projects because that's how they're going to meet demand in the future,” she said.