2 decades after removing dam near Shelton, salmon and other fish return in record numbers 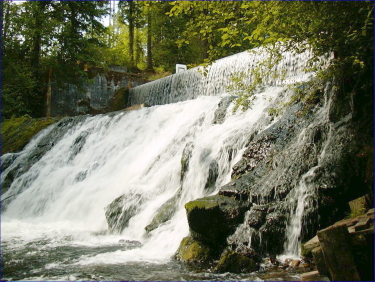 Photos from Tetra Tech [enlarge]
Goldsborough Creek Dam, before it was removed in 2001, hindered fish migration. 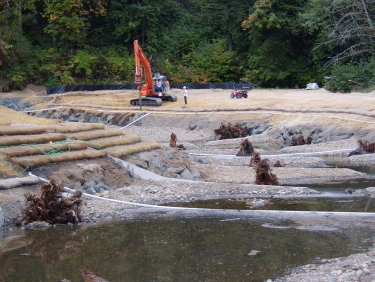 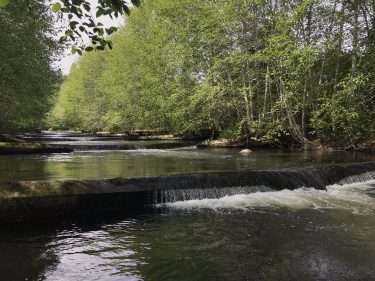 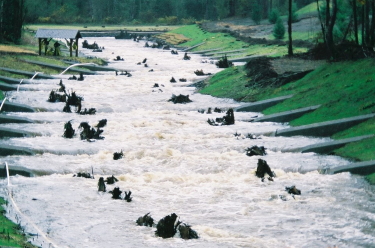 [enlarge]
In November 2001, a significant flood surged through the just-completed site, giving the new weirs and restored creek banks their first stress test.

Projects that reestablish fish migration to restore salmon populations in western Washington are being planned, designed and implemented at an accelerating rate through collaborative efforts from multiple federal, state and local agencies and tribes. These projects that remove fish barriers and restore fish passage honor obligations to tribes, support a healthy Puget Sound, and create economic and recreational opportunities for communities.

Completed in 2001, Goldsborough Creek Dam removal in Shelton was the first dam removal project implemented for environmental purposes by the U.S. Army Corps of Engineers' Civil Works Program. The Corps' Seattle District led the project in association with the state Department of Fish and Wildlife and dam owner Simpson Timber Co. The 35-foot-tall Goldsborough Creek Dam was originally built in 1885 and rebuilt in 1921. The dam blocked upstream and downstream access for migratory fish. After sustaining significant flood-related damage in the 1990s, the dam became a liability to Simpson Timber and was removed in 2001.

The removal project demonstrated the value of collaborative partnerships among multiple public and private entities to achieve durable and sustainable fish passage solutions. Project goals included improved upstream and downstream fish passage and habitat access, which would subsequently improve long-term salmonid resiliency and prosperity. In addition, the project needed to be completed with minimal impact to the Simpson Timber's operations and infrastructure.

Removing the dam reopened 24 miles of prime rearing habitat for migratory fish, including juvenile and adult chum, coho and chinook salmon, steelhead, and sea-run cutthroat trout. The project was designed by Tetra Tech and constructed by Stan Palmer Construction. The team restored the creek channel and installed 36 concrete weirs, each dropping 1 foot, over a 2,000-foot stretch of stream channel.

Existing infrastructure and environmental conditions posed significant challenges upstream and downstream of the dam site, including highly erosive bank conditions, high-velocity water flows, and needing to complete the work in a single low-flow season between primary fish migration patterns in the spring and fall.

Stream restoration normally takes advantage of natural functions and processes, but the high vertical gradient upstream and downstream of the former dam required a more engineered solution to create a stable, predictable channel that reduced risk to existing infrastructure and improved fish passage for targeted species. Tetra Tech, Fish and Wildlife and the Army Corps determined that concrete weirs — small retaining walls over which water flows — would provide the most effective and resilient restoration for Goldsborough Creek.

The weir layout, low-flow channel and crest shape were designed and constructed to improve migratory fish passage upstream and downstream of the former dam. Because chum salmon will not leap over even a low barrier, each weir included a triangular low-flow notch, creating a mild slope with a low-flow margin passable by juvenile fish. The weir crests were chamfered to optimize fish passage across a range of flow conditions. The design incorporated large woody debris such as root wads and logs to provide cover, resting areas and protection for migrating fish, particularly juveniles.

Bioengineered bank protection strategies balanced erosion protection requirements with biological and habitat priorities. Rocks, fabric-wrapped reinforced soil-lifts, vegetation and plant-covered riprap enabled long-term resiliency in areas of the restored habitat where sheer stresses were highest. While more costly, a key design decision to widen the creek channel in several places allowed the creek to reestablish its banks more naturally rather than being constrained by an overly rigid design.

A flood event tested the renewed site only a month after construction was completed; in 2009, the area flooded again with flows nearly equal to the maximums for which the structure was designed. In both instances, the floods caused only minor erosion damage, proving the resilient benefit of hydraulically engineered channel and bank stabilization solutions to sustain consistent fish passage.

The riparian plantings have flourished over the past 20 years; the vegetation has regrown and moss and algae now cover the concrete weirs.

Removing the dam prompted additional conservation and restoration actions in the watershed:

• The tribe and the salmon enhancement group also replaced undersized culverts upstream of the dam site that blocked a tributary to Goldsborough Creek, opening up nearly a mile of additional spawning and rearing habitat in the upper watershed.

• The tribe and Capitol Land Trust protected 10 miles of shoreline along Goldsborough Creek to conserve wetland and riparian habitats that support salmon productivity.

Fish have returned to the watershed in record numbers. The Squaxin Island Tribe's fisheries program has monitored fish passage for more than 20 years on Goldsborough Creek. Tribal fisheries biologist Danial Kuntz observes that since the dam was removed and habitat restored, Goldsborough Creek has seen a tenfold increase in fish population. He sees this as proof of the project's success and believes that “it supports the science behind the theory of dam removal.”

Because coho spend a full year in the creek system before migrating, their survival can indicate the stream ecosystem's health. To evaluate the impact of the expanded habitat, Kuntz counts juvenile coho (smolts) as they migrate to the ocean. His data shows continually increasing counts, from an annual average of 9,090 in the three years prior to project completion (1999-2001) to an average of 81,705 in the past three years (2018-2020). Kuntz's 2020 count tallied a record 129,412 smolts. Kuntz's data underscores the significant and sustained value the dam removal and subsequent watershed initiatives have had on fish habitat and the broader natural ecosystem.

The sustained progress of environmental and fish population recovery over the past 20 years in Goldsborough Creek proves that projects that remove fish barriers and restore fish passage can have long-term impact on the environment, the tribes and the community, in addition to the health of fish populations.

The Goldsborough Creek project highlights the importance of collaboration among agencies, tribes, design and construction professionals, and the community to create constructible, affordable and resilient solutions. The documented recovery of salmon in the Goldsborough Creek watershed following the dam removal offers hope that upcoming projects in Washington state will also result in meaningful and measurable improvements in salmon recovery in our region.