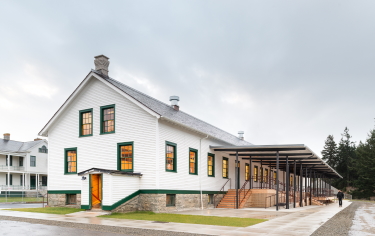 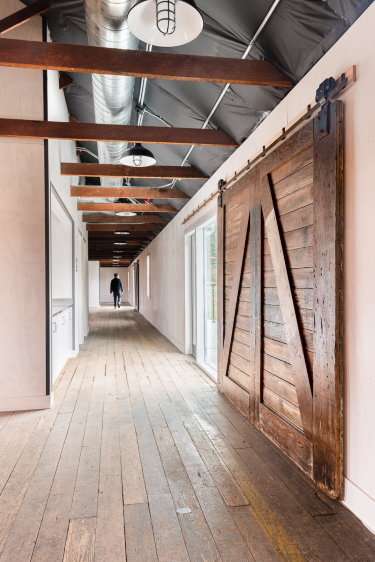 For Signal Architecture + Research, preservation has its rewards.

“While preservation is not without challenges, the opportunity to merge the historic and future lives of the buildings has been incredibly rewarding,” said Mark Johnson, a principal with Signal Architecture. “Looking back at the design process as we conclude the construction phase, we can see the positive result and importance of the edits we made to our work.”

Signal Architecture's rehabilitation project marks a significant redevelopment project at Ford Worden — a project that began with Signal's work on a master plan for the buildings. Eventually, Makers Square will repurpose nine vacant or underutilized historic structures renovated into a showcase for creative community building and placemaking. The nine buildings will be reconfigured as flexible classrooms, galleries, studios and workspaces supporting a variety of programming.

Signal Architecture redesigned the 15,000-square-foot Building 305, which was built in 1905 as the Quartermaster Storehouse. Building 305 will serve as the nucleus for new arts, culture and education programs on the campus. It has been reconfigured as flexible classrooms, galleries, studios and workspaces that can be easily and efficiently adapted to multiple uses in a day — spaces that can host a writing class in the morning, a painting class before lunch, a lecture in the afternoon and an exhibition or reception that evening.

“One of the greatest priorities and main challenge for us as architects was to retain the ephemeral character of buildings that have been hard at work for a century,” said Johnson. “The materials, scale and character that makes up these buildings were considered common in 1900. However, they are premium quality today. Our charge was to repurpose the buildings in a way that marked the next 100 years — with materials and systems that were uncomplicated, durable and beautiful.”

Johnson said his firm approached the project as “investigators,” removing accumulated elements to make space for the new arts and education programming, and as a result the historic character and texture of the buildings will be a signature experience of their reuse.

“The buildings are listed on the National Register of Historic Places, so we were strongly encouraged to maintain the exterior and interior materials in place as much as possible,” said Johnson. “As a result, the sandstone foundation is visible in the basement, most columns and beams remain visible, and interior finishes remain largely intact. From this point, the material palette is also very limited, so we were very measured in how many new materials we introduced to the project, choosing rather to adhere to the existing palette as much as possible. The roof is slate and was replaced in kind. It is expected to last at least 100 years.”

Johnson said many of the buildings were built to be rugged, so they were finished with production materials such as Douglas fir beadboard, which he said was durable and could take any amount of abuse the user could provide.

“Inspired by the linear nature of beadboard, we employed a whitewashed Douglas fir shiplap finish on most new interior walls,” Johnson said. “The horizontal, durable nature of the new material echoes the original without mimicking it, which is a key component for the Secretary of the Interior Historic Preservation Guidelines.”

He said his design team elected to not refinish large portions of the structure, floors and places where stairwells, cabinetry and walls were removed. “These shadows of previous uses tell the story of how the buildings were used and can inspire the next generations of makers,” he said.

Since Building 305 was originally heated with steam and cast iron radiators, Signal took that cue to employ a hot water loop radiant heat system. The result has a far softer visual impact than a forced air system and prepares the project for a future district geothermal energy system.

Johnson said Building 305 was built as a storehouse and the interior retains the inventory labels that once categorized stock for construction and maintenance, equipment, gear and garments.

Buildings 308 and 324 will also be part of the classroom/art studio programming and are each 2,500 square feet.

“Military history was what founded the fort,” Johnson said. “However the cannons never fired a shot in defense. Fort Worden was a military base for 51 years, and it has been a state park for 48, with 47 of those years hosting arts and humanities organizations like Centrum. We like to say, ‘make art, not war,' and that the military had a wise vision in creating an inspiring arts and recreation facility on a bluff overlooking the Salish Sea.”