From the street, little has changed at 1424 11th Avenue in Seattle's Pike/Pine neighborhood. Now it's open to the public, a portal for the hungry, thirsty and curious — or neighbors just looking for a shortcut to 12th Avenue.

But Chophouse Row is much more than a shortcut. Inside the arched opening, a small pedestrian street (the Row in Chophouse Row) is lined with retail corners and nooks, and it leads to an irresistible courtyard with a mezzanine dining level.

Chophouse Row, designed by Sundberg Kennedy Ly-Au Young Architects and Graham Baba Architects, is a seven-story mixed-use building with a new structural system bolted onto an old automotive base structure. 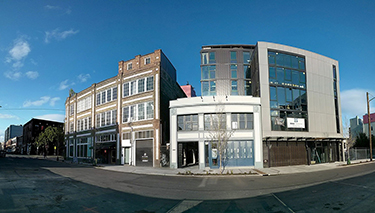 Photo by Myra Lara/Sundberg Kennedy Ly-Au Young Architects [enlarge]
The entry to 1424 11th Avenue is a portal to the inner world of a city block. 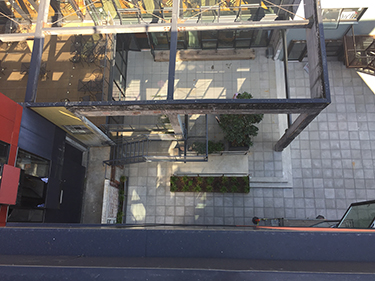 . Photo by Clair Enlow [enlarge]
Behind Chophouse Row the bones of an old automotive structure are exposed in the courtyard 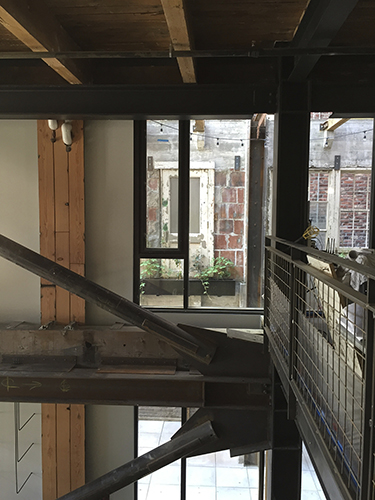 The base of the new building is pulled back from the frame of the old one, making room for the pedestrian street. There are two mezzanines inside the first level, four new floors of office space and three penthouse apartments on top.

Walking through Chophouse Row is a good way to see the bones of the old Pike/Pine neighborhood. Archaeology meets architecture in there, like a museum exhibit.

Liz Dunn of Dunn & Hobbes purchased the original Chophouse back in 1999, one of four adjacent buildings assembled by the previous owner before Dunn acquired them. She immediately began making plans for a unique mix of old and new.

Chophouse Row is the last piece. The project endured through two recessions and several stages of construction. “It's been a very incremental process,” she said.

Dunn thinks Chophouse got its name from local bands practicing there. Inside was a sheet-rocked warren of rehearsal spaces, littered with egg crate foam, cigarette butts and beer bottles.

Jim Graham of Graham Baba Architects is a long-term member of the design team for Chophouse. The late night debris is gone now, but no musicians were harmed in the making of this building, according to Graham.

He knows this project from the inside out. Dunn brought him into it early so he could go spelunking, his word for exploring the bones of an old building and finding creative ways to save them.

“Any normal developer would have taken them down and started from scratch,” said Graham.

But Dunn isn't any normal developer. Before starting Chophouse Row, she salvaged the adjacent Piston & Ring Building and completed the adjoining Agnes Apartments at 12th Avenue and Pike.

She's also the co-developer of Melrose Market, another unique combination of preservation and new construction. She and her design team are known for reusing old buildings, or character buildings, and making them part of a neighborhood.

Architect and urban designer Lesley Bain collaborated with Dunn on the 12th Avenue projects, first at Weinstein A + U Architects + Urban Designers and then with her own firm, Framework Cultural Placemaking.

The two first explored the possibilities of a through-block passage several years ago when they positioned a new mezzanine floor in the Piston & Ring Building, which happened to be on the same level as 11th Avenue. Dunn dates the idea of Chophouse Row from that time.

Dunn said it was not a simple decision — or an easy process — to stack a mid-rise office building on top of an old one-story building, expose the old structure, and add a “sister” structure.

Just to make things even more interesting, there are three different uses — office, retail and housing — in the finished space.

To celebrate the completion, Dunn & Hobbes is throwing a neighborhood party at 5 p.m. Thursday in the courtyard. A beer garden with local bands will bring back the days when the building was a rehearsal space. New tenants — Chop Shop Cafe & Bar, Kurt Farm Shop, Amandine, and Bar Ferd'nand — will serve upscale treats.

It's just a party, but take note: In a few years, Chophouse Row and the complex of recycled structures around it might easily become the heart of the Pike/Pine neighborhood.

The courtyard and passageways cut into the total square footage, and saving the original structure also cut into the bottom line, but it's a long-term investment for Dunn.

The spaces that make Chophouse Row an interesting destination also make it a great place to work. “I don't think there is anything irrational about doing these harder projects,” she said. “In the long run we keep our tenants. The value of the asset keeps going up.”


Clair Enlow can be reached by e-mail at clair@clairenlow.com.