By KATHY GRAY
The Dalles Chronicle 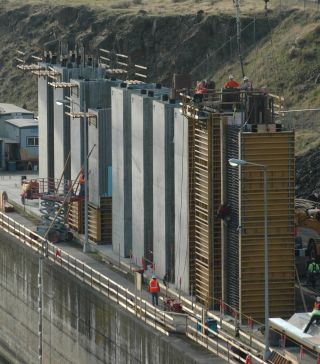 AP Photo/The Dalles Chronicle, Kathy Gray
Workers cast wall segments at a site near the Dalles Dam’s lock. The segments will be barged to below the spillway and lowered into place with derricks. The shorter sections at left will run down the s-shaped face of the spillway. The project is designed to help the young fish slip past predators after they make it past the formidable dam.

THE DALLES, Ore. — Smolt have a rough life. Their perilous journey from birthplace to sea is fraught with deadly barriers. A new project at The Dalles Dam is designed to help the young fish slip past predators after they make it past the formidable dam.

Young salmon make their way through the dam in one of three ways. About 10 percent go through the powerhouse and turbines. Another 10 percent travel through the blasting water of the ice and trash sluiceway that flows out of the south side of the dam.

The remaining 80 percent are the focus of the $45 million spill wall project. They make their way through the spillways from April through August when the dam is spilling water for fish.

“The dams are required to spill 40 percent of the river,” said Lance Helwig, the U.S. Army Corps of Engineers project manager for the spill wall. The requirement is part of the rules in force for salmon protection under the Endangered Species Act.

The idea behind the spill wall is simple: Fish that come through the fast-flowing waters of the spillway are disoriented and easy prey for predator fish like northern pikeminnow and smallmouth bass that lurk in the shallows just beyond the dam.

At present, the water from the spillway disperses the little fish toward those shallows. When the spill wall is done, it will direct those young salmon toward a deep, swift-running channel known as a thalway that runs downriver below the surface near the northern riverbank.

Predator fish don't like the fast, deep water, so the idea is that diverting the juveniles to the channel will help them regain their natural defense mechanisms before being faced with predators.

The spill wall is shaped like a giant hockey stick that stretches past a stilling basin and across the natural shelf that extends beyond it, directing water toward the thalway.

Studies performed on a scale model of the dam indicate that guiding juvenile salmon to the deepest, fastest part of the river will likely improve survival rates for yearly chinook and steelhead by 4 percent to 98 percent for fish that travel over the spillway.

“It doesn't sound like much, but 3 or 4 percent makes a big difference when you're talking about tens of millions of fish,” Helwig said.

“We've spent quite a bit of time studying The Dalles and we're confident this may be the solution to get us up to survival targets,” Helwig said.

Once the wall is completed in 2010, more fish studies will take place to gauge the success of the project.

The spill wall takes up more than half of the annual $80 million to $90 million budget for fish mitigation that is split between the Portland and Walla Walla U.S. Army Corps of Engineers districts that oversee the dams on the Columbia and its tributaries.

General Construction Contractors of Poulsbo won the contract for the project. The company has worked on a variety of fish mitigation projects on the big Corps dams, including Bonneville, John Day and Ice Harbor.

“We've been working on the Columbia for several decades,” said Dan Proctor of General Construction Contractors.

Workers have been on site since summer, precasting the heavy pillars that will fit together to make the wall.

The tallest of the pillars is about 37 feet tall and weighs about 200 tons. The anchor tendons — 118 feet in length — will be drilled deep into the bedrock below to hold each piece of the wall in place.

Precasting work on the pillars has been under way at the dam since summer, but in-water work had to wait for the six-month window of time from Oct. 1 to April 1, when most of the migratory fish have made their way through the river.

The contractor will build the first 300 feet of wall — the part before the hockey-stick angle — during the current in-water work period. They will continue to cast the pillars on shore until the pieces for the entire wall are completed.

The remainder of the wall will be placed and completed between October 2009 and April 2010, in time for the annual spill season, when the largest number of juvenile fish migrate downstream.

The finished wall will be 10 feet wide and about 830 feet long, with the first 200 feet being 43 feet high and the remainder being between 25 and 30 feet high.