Roof on Gates' garage has 1.4 acres of green 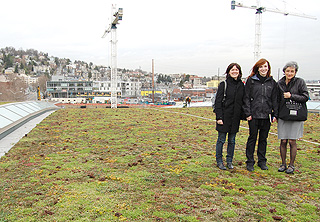 Photo by Katie Zemtseff [enlarge]
Amy Cragg and Shannon Nichol of Gustafson Guthrie Nichol, and Jeanne Iannucci of NBBJ, stand on the 60,000-square-foot green roof they all helped create.

The $500 million Bill & Melinda Gates Foundation headquarters is now under construction and targeting LEED gold. But its garage next door has been completed and boasts the largest green roof in the city of Seattle. It is awaiting a separate LEED gold designation.

At 60,000 square feet or about 1.4 acres, the sloped roof is easily visible to the public. It is just a crosswalk away from Seattle Center on the east side of Fifth Avenue North. The roof can also seen from the Space Needle or from homes on Queen Anne Hill.

The public garage was completed last summer. It has four floors of below-grade parking and 1,020 spaces. NBBJ was the architect, Sellen Construction was general contractor. Gustafson Guthrie Nichol was landscape architect. The headquarters should be complete in 2010 and able to accommodate 1,200 employees. 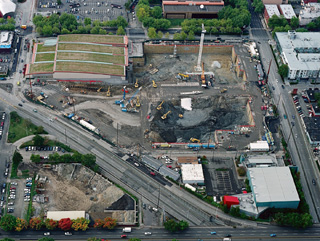 Shannon Nichol of GGN, said the green roof sets a precedent in Seattle because of its size and design, which was inspired by German roofs. In Germany, she said, a green roof is viewed not as a garden but as a functional roofing choice that is optimized to be as low maintenance as possible. “You could call it a minimalist green roof.”

The Gates roof has five inches of soil over a layer of synthetic drainage. Other styles of constructing green roofs include sod-based roofs and planter-based roofs. Models predict the roof will treat about 90 percent of the water that falls on it. The other 10 percent goes into the local combined sewer overflow system.

One goal of the roof was to make it visible and improve the view for neighbors. But another goal was to make a green roof that worked well and looked good. “(We wanted) to make sure that this one would succeed and be a great example for Seattle,” Nichol said.

NBBJ did the green roof on the Seattle Justice Center and GGN did the green roof on Seattle City Hall. Jeanne Iannucci, principal at NBBJ, said both roofs were eventually successful but people thought they were initially failing because of how they looked. “Both roofs did not look very good at the beginning,” she said.

Nichol said the roof, combined with Seattle Center and future landscaping around the Gates headquarters, will create an “extraordinary large zone of green” for an urban area that will be impressive when seen from above.

“The scale changes,” she said. “You go from dense block-by-block buildings to this sort of continuity of green.”

Iannucci said the green roof is also meant to reflect the natural history of the area, which used to be a meadow.

Lisa Howe Verhovek, community relations manager at the Gates Foundation, said the project was never intended as a demonstration of sustainability. But the foundation plans to be an 100-year occupant of the headquarters and it wanted a campus that would withstand time while being considerate of its neighborhood. “It's not specifically part of our mission but it is really what we think is the right thing.”

Green roofs have not proliferated in Seattle as they have in Chicago, where there are more than 250, or in Portland, where the city has a green roof grant program. Nichol said some Seattle building owners may have been intimidated by the cost and green roof failures. Often in King County, she said, green roofs fail due to weeds.

The team said it did not have specific costs for the garage's green roof, but Iannucci said green roofs on average are about double the cost of a traditional roof.

To increase the number of green roofs in Seattle, Nichol said the city needs successful examples. Teams, she said, should concentrate on making functional green roofs like the ones that have succeeded in similar European climates. Using “more bullet proof” designs and materials will make people will more confident about trying a green roof, she said.

Nichol said it would also help for the city to recognize the stormwater benefits of a green roof and credit owners for a product that significantly reduces runoff.

In addition to the roof, green elements of the garage include use of low VOC finishes and recycled materials. The garage is not heated, other than a small space for attendants.

The old parking lot covered 12 acres, while the garage uses less than two.

The garage also saves energy by having two exchange fans where there would normally be one, which adds up to four on each floor. Multiple fans decrease the amount of air that runs through each fan. “That's a big energy saver for the garage,” Iannucci said.

NBBJ, GGN, Sellen, KPFF and Arup are also working on the headquarters and the Seneca Group is project manager. The foundation is looking for local firms to work on the interior of a visitor's museum at the headquarters.