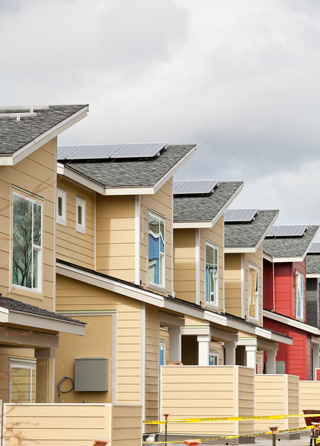 King County Housing Authority's Greenbridge community in White Center is getting a solar photovoltaic array. The authority said the 213-panel system on nine buildings is the largest residential solar array in the state.

Teams are installing panels on the roofs of 24 public housing units in Sixth Place Apartments. GGLO Architects, Glumac Engineers and Michael Nouwens Structural Consultants designed the rooftop system. Panels are being installed by A & R Solar, and overseen by Walsh Construction.

Because of cost constraints, the project was initially designed to be solar-ready but without panels. But KCHA said in a press release that pricing for the entire project came in lower than expected and that made installation of the system feasible.

When the solar panels go online this summer, they should generate 52,558 kilowatt hours per year, according to KCHA. Excess power generation will go back into the electric grid.

Four workers are being employed on the solar project. Dave Kozin, director of A & R Solar, said the work allowed his firm to hire new workers that he will keep on after the project is complete.

KCHA has solar installations on the roof of the Jim Wiley Community Center at Greenbridge, as well as at 12 other sites it owns or manages.