With a site footprint of 23 acres, waging an aggressive sustainability campaign at the Consolidated Rental Car Facility was one of Turner Construction’s most ambitious green efforts to date.

Every drop of water that hit the project site was directed, treated and discharged by the project team. Since the site is at the head of the Green River, constant vigilance was necessary to prevent widespread pollution, contamination and sediment erosion for local waterways that feed from the site.

With rainy weather and construction water requirements on such a large site, water filtration of this scale was no easy task. From the moment a raindrop or construction-derived water hits the ground, it was filtered through existing catch basins to a 1.6 million-gallon detention pond in the southeast corner of the site. From there the water was processed through a chitosan water treatment system — a biodegradable, sustainable method that promotes turbidity settlement and balances pH levels for discharge compliance. 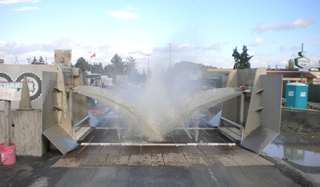 Following stringent daily quality testing standards established by the port that surpassed Department of Ecology regulations, the water was released into stormwater drainage systems that flow beneath Highway 99/International Boulevard into Gilliam Creek.

Runoff from the primary wheel wash station was processed through a secondary water treatment system that funnels directly into the sewer systems, isolating oil and contaminated soils.

In the winter months, water was constantly tested and discharged to guarantee capacity in the event of significant rainfall. Efforts to maintain low detention pond volumes were carefully balanced with efforts to control peak flow rates and high stormwater runoff volumes, to prevent adverse water quality impacts upon the Green River tributaries.

Even after construction is complete, the RCF will continue to discharge clean runoff water through a 1.1 million-gallon, 4.5-acre detention tank installed beneath the building that flows out through a bioswale filtration system. This permanent tank was constructed early as a secondary system for water processing, and was used in tandem throughout construction with the temporary detention pond.

Roughly 85 percent of site precipitation and water used for rental car care amenities (including car washing) will be reclaimed, processed and re-used, while the rest of the cleaned site water will be released into adjacent stormwater sewers. Overall, the project has processed and discharged more than 54.5 million gallons of clean water back into stormwater systems that feed into the nearby Gilliam and Des Moines creeks, and ultimately into the larger Green River and Puget Sound ecosystems. 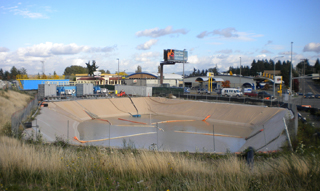 [enlarge]
Site runoff was collected in a 1.6 million-gallon detention pond before running through a chitosan water treatment system.

Working closely with our excavation contractor, City Transfer, the port’s third party inspector, Phoenix, and the soils engineering firm of Shannon & Wilson, the Turner team removed all contaminated soils to either be treated and recycled or incinerated and hauled to approved facilities.

The RCF is not only the Port of Seattle’s first LEED project, but also the first LEED New Construction 2.2 silver rental car facility in the United States.

As the first — and to date, only — contractor to achieve Salmon-Safe accreditation, Turner works continually to achieve zero sediment runoff and preserve the integrity of the Puget Sound and its tributaries.

Turner worked closely with Waste Management to track and document rates for materials diverted from landfills. From the beginning of the project in 2008 through this month, the team diverted more than 15,000 tons of concrete, metal, wood, mixed debris and residual trash from landfills.

The team further reduced site waste through stringent green construction standards, BIM innovation, extensive pre-planning and sustainability awareness, and by adopting lean strategies. For example, field work stations were set up on the lid of the site detention pond to provide additional storage room, creating a safe and efficient space for pre-fabricating formwork and block-outs and resulting in less packaging and trash on-site.

Through these comprehensive efforts, the project achieved an overall recycling rate of 96 percent.

Turner is proud of the success in preserving the environment around the construction site. The efforts of the entire project team during the last four years of construction have met the port’s ambitious green goals by redeveloping a brownfield into a clean, efficient and sustainable facility, and improving the local environment and aquatic habitat.

Scott Holbrook is a vice president and construction executive with Turner Construction. He served as operations manager for the Consolidated Rental Car Facility project.