Whether in the form of earthen or adobe blocks, stone, brick or concrete, massive construction has been omnipresent throughout history.

These materials have been used in native dwellings in the American Southwest, the pyramids of Egypt and medieval castles and cathedrals, and keep indoor temperatures cool on even the warmest of days.

Although it is understood that mass can help to improve comfort, these materials were used primarily because they were readily available and well understood by designers and builders. As time passed, buildings changed dramatically due to the advancement of building materials, construction techniques and changes in workplace culture. The advent of steel, Portland cement, float glass, elevators and air conditioning resulted in tall glass-filled buildings that stand in spite of the environment and sever all but a visual connection to the outside world.

As we progress towards an increasingly knowledge-based economy, technology within the workplace advances, and occupant density increases. The combination of the building and workplace paradigm shifts result in buildings that use a tremendous amount of energy, collectively accounting for 41 percent of the U.S. annual energy demand, and 75 percent of U.S. electrical demand. Furthermore, energy consumption is closely tied to greenhouse gas production, and reductions in energy use directly reduce greenhouse gases released into the environment.

Photo by Benjamin Benschneider/ZGF Architects
Phase-change material lines some of the walls and ceilings in this University of Washington science building.

The focus on low-energy building has come and gone throughout recent history, with each renewal adding more tools to the tool box. The OPEC crisis in the early 1970s spawned a short-lived sustainable movement in which massive construction was briefly back in favor, but was jettisoned as fossil fuels became readily available.

Around this time, packaged phase-change material solutions were introduced to the building trades, but were unreliable due to a limited number of heat-and-cool cycles as well as poor packaging that had a tendency to leak. Within the past decade and a half, high-performance building has returned to the forefront due to concerns with national security, energy independence and climate change.

The notable difference between the sustainable movement of the 1970s and now is the use of technology to develop and vet high-efficiency solutions. Complex building energy models are created to illustrate the benefit or detriment of low-energy strategies and greatly reduce the risk associated with adopting atypical solutions. Essentially, we prove through the use of high-powered software that the solutions employed successfully for centuries are still applicable to the modern world.

So, how and why does mass help maintain comfort, and if it does such a good job then why do we even need phase-change material?

Energy always flows from high to low or hot to cold, and the mass needs to be cooler than the space to absorb the heat from occupants, equipment and sunshine. The high density of mass coupled with the difference of temperature, creates a reservoir of “coolth” and absorbs interior heat gain with minimal temperature increases to surrounding spaces.

Photos courtesy of ZGF Architects [enlarge]
An inch of phase-change material, shown inside this ceiling space, can store and release as much heat as a foot of concrete.

The absorbed heat can then be released at night to help warm the space, or rejected into cool night air, to recharge the mass and begin the cycle anew the following day. In climates with nighttime temperatures that dip well below daytime highs, mass can be recharged by simply opening the windows during cooler evening hours and closing the windows when temperatures begin to climb.

Concrete is ubiquitous in modern buildings and can provide the benefits of massive construction commonly found in ancient structures. But even in green building design, bare concrete interior surfaces are often the exception rather than the norm.

Typically, carpet, drywall, acoustic ceilings and other finishes are used to conceal concrete building elements, and effectively eliminate the thermal benefit of using concrete as the primary structure of a building. Since we have concealed this resource, can we use thermal storage in a manner other than exposing every concrete surface?

A company called Phase Change Energy Solutions has developed a bio-based phase-change material, or PCM, that uses the concept of mass thermal storage and release by leveraging the energy associated with a change of phase.

A material changes phase when it transitions from a solid to a liquid, and a liquid to vapor. Much more energy can be absorbed or released from the change of phase than from heating or cooling a material alone, requiring much less volume to achieve the same thermal capacity. One inch of phase-change material is as effective as 12 inches of concrete, and can be easily placed within interior walls and ceilings.

Phase-change material in a building can be equated to ice within an ice chest. Ice absorbs heat and melts, changing phase from solid to liquid, while keeping the contents of the chest at a constant temperature near the freezing point of water.

The capacity of ice to absorb heat through melting is far greater than the heat capacity of cold water, and expands the effectiveness of water as a cooling medium. Once the ice has melted fully, the water begins to warm along with the contents of the chest. 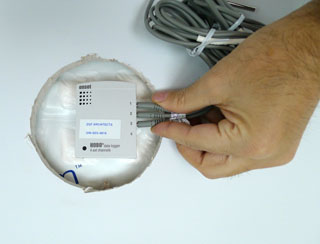 When refrigeration was first developed, ice was used to cool early skyscrapers of New York City and is still employed in new green construction such as the Bank of America building at One Bryant Park.

By using phase-change material, the need for cooling can be reduced, and the effectiveness of natural ventilation strategies can be expanded. Unlike ice, and due to the relatively high melting point, PCM can be recharged for the following day by exposing it to cool night air.

Bio-PCM is produced in large sheets with the oils encapsulated in pockets similar to a sheet of uncut ravioli. The sheets can be stapled to studs in wall assemblies or laid on top of a drop-ceiling assembly.

The University of Washington Molecular Engineering and Sciences Building is composed of research laboratories, open-office graduate workspace and faculty offices. Due to the very different usage and space conditioning strategies required, the laboratory components were separated from the offices by a glass wall. The laboratories are conditioned by standard means with frequent ventilation air changes to remove airborne contaminants.

It is the first building in which ZGF Architects used a phase-change material application inside walls and above the ceiling. PCM was not the sole cooling solution but plays a significant role in the holistic natural ventilation strategy for the non-laboratory spaces.

The office area is naturally ventilated by operable windows and exhaust stacks that remove heat from people, equipment and the sun. Although Seattle’s climate is rather temperate, a buffer was needed to ensure comfort was maintained on warmer days.

Phase-change material was used to expand the capacity of the natural ventilation strategy as the majority of concrete in the building was covered with finishes suited for a research facility.

The combined reduction in energy use from the natural ventilation strategy, resulted in a nearly 98 percent decrease in fan and cooling energy in the offices when compared with a conventional cooling system. The laboratory spaces are much more energy intensive, resulting in projected energy savings of 32 percent for the whole building when compared with a conventional baseline building.

Because Bio-PCM is an innovative product new to the market, a monitoring scheme was developed to measure the temperature of the PCM over time to verify that the PCM performed as expected.

Due to a lack of true control and experimental conditions, the ability to understand the full benefit of the PCM is limited. ZGF did not want to create a sacrificial space completely devoid of PCM for control purposes and run the risk of compromising occupant comfort.

Instead, PCM was excluded from one stud bay cavity in an office and one section in the ceiling. The intent is to use data collected from the areas without PCM as a comparison to areas with, and extrapolate to understand the effects on the larger environment.

Data-loggers produced by Onset Corp. called HOBOs were placed within adjacent wall cavities with and without PCM and similarly in the ceiling. Temperature measurements are recorded at 15 minute intervals. Initial data has illustrated that bio-PCM solution has been effective in moderating temperature swings within the space.

In Washington, electricity is inexpensive relative to most of the United States. In locations where energy is more costly, the use of phase-change material in conjunction with complementary strategies such as natural ventilation has the potential to deliver significant operational cost savings over the life of the building without compromising occupant comfort.

For instance, if nighttime temperatures are low, one could offset expensive afternoon peak cooling costs with free cooling captured and stored in the PCM from the previous night. If building use prohibits the opening of windows during nighttime hours, the building ventilation system can blow cool air through the space, using off-peak electricity rates to charge the PCM and offset cooling during peak-rate hours.

Ed Clark is a sustainable designer at ZGF Architects. He is a founding member of ZGF’s project performance team, working to meet the goals of the 2030 challenge.