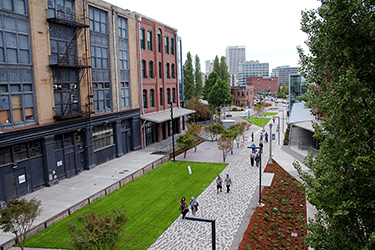 An old rail spur in Tacoma is not only a pedestrian and bike trail, it's also a stormwater filter.

Prairie Line Trail-UWT Station is open at the University of Washington Tacoma. The trail includes a portion of the old Prairie Rail Line railroad spur and runs through the campus from South 17th to 21st Street.

A custom treatment vault was built to filter out between 75 and 90 percent of pollutants from stormwater before it is released into Puget Sound. Underdrain stone, Filterra media, Filterra mulch and top level plants were used in the treatment vault, which will filter stormwater from 40 acres of hillsides above the trail.

Korsmo Construction was the general contractor and said the treatment vault is one of the first custom installations of its kind. It was a collaboration by the contractor, state Department of Ecology, city of Tacoma, UWT and the design team.

This segment of the trail was designed by Place Studio, with team members Atelier Dreiseitl, SRG Partnership and KPFF Tacoma.

The trail is planted with mature Japanese maples, birch trees and low-maintenance native plants to create a linear park.

Sections of the historic railroad tracks weave through the trail as a reminder of its original purpose.

The project is part of the mile-long Prairie Line Trail. When the trail is finished it will run between South 26th and Dock streets, following the original path of Northern Pacific Railway through downtown Tacoma.

The city of Tacoma is doing the next two trail segments: one running north of the UWT campus and another running south.

Construction on the north end is scheduled to begin next spring. No contractor has been selected. BCRA is the landscape architect.