More rigorous stormwater regs may be in place by June 2015 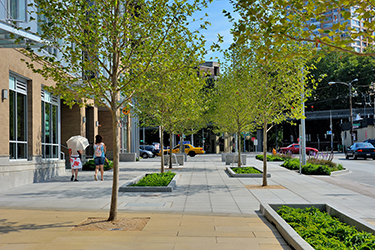 Seattle's new draft stormwater manual requires developers of projects with 2,000 square feet or more of impervious surface, such as roofs, driveways and roads, to use green stormwater infrastructure where feasible.

Those practices seek to mimic how stormwater moves through a forest, where water is stored, soaked into the ground and filtered through vegetation and soil, said Alice Lancaster, an associate civil engineer with Herrera, a Seattle-based environmental consulting firm.

The draft manual is under review by the state Department of Ecology and is expected to be finalized in June 2015, she said.

The current manual has requirements for green stormwater infrastructure (GSI) but they are not as rigorous as those proposed in the draft, she said.

“Seattle has been leading the way in a lot of ways in western Washington,” Lancaster said.

She said that ideally, development should use low impact strategies, which seek to minimize the disturbance to the hydrologic functions — essentially the way water naturally moves through native soil and vegetation. But low impact development can be tough because much of the urban area in cities has already been disturbed and is highly impervious, she said. Also, sites are smaller.

So instead the draft manual requires developers to use green stormwater infrastructure (GSI) to help replace the hydrologic functions that have been lost.

To comply, developers can select from GSI listed in the draft manual, such as rain gardens, permeable pavement, green roofs and rainwater harvesting.

If they feel those strategies are infeasible on their sites — such as because the property has steep slopes or high groundwater — they have to explain why. Only certain reasons are acceptable, and they are on a list in the manual, Lancaster said.

Herrera is helping to revise the manual, which was last updated in 2009.

Lancaster said her firm has been helping to push green infrastructure science forward for a decade. Since 2005, it has been developing GSI-related requirements for cities and counties in western Washington.

San Francisco recently hired it to develop standards for rain gardens and permeable pavement on city streets and in private developments.

That city is doing green stormwater infrastructure retrofit projects on streets to reduce overflows into San Francisco Bay and the ocean from pipes that convey both sewage and stormwater.

The standards will help developers, designers and the city in designing, building and monitoring these installations, Lancaster said.

Seattle, too, has an issue with overflows from combined stormwater/sewage pipes.

To help address this, the city hired Herrera to design rain gardens for 17 blocks of the Delridge neighborhood of West Seattle. The rain gardens will be in right of way between the street and sidewalk, to control runoff from sewage/stormwater pipes into Longfellow Creek.

Green stormwater infrastructure can be retrofitted into existing streetscapes, parking lots and buildings and incorporated into new ones. Herrera said that not long ago GSI practices were considered fringe, but they have entered the mainstream of design. GSI was preached by permaculture practitioners in the 1970s and then championed by green building enthusiasts in the 1990s and 2000s.

Taylor28, at 100 Taylor Ave. N., is one downtown Seattle project that uses green stormwater infrastructure. Mithun was the architect and landscape architect on the 197-unit mixed-use apartment complex developed by BRE Properties. It opened in 2008.

Taylor Avenue is not a through street. Deb Guenther, a partner at Mithun, said the avenue was narrowed by 20 feet to create a linear plaza for the project, and the city has established this pattern for the street redevelopment for another four blocks in the right of way of the avenue toward Gates Foundation campus.

Rainwater that hits the plaza is collected into rain gardens that have “infiltration galleries” that allow the water to soak into the ground, she said.

A system that collects rainwater from the roof in a 16,000-gallon cistern in the parking garage is used to flush toilets in the retail spaces. It is also used to water plants in the public right of way, something the city allowed because BRE agreed to maintain the plaza, Guenther said.

She said Seattle is a leader nationally in using GSI, which reduces the demand for building new and larger pipes.

Chris Webb, who is now an associate engineer with Herrera, was a consultant to Mithun on the GSI for the Taylor28 project.

Webb said the Washington Department of Ecology has hired Herrera to do statewide training for the building industry on low impact development, which includes green stormwater infrastructure practices.

Webb there's a healthy dose of resistance to that type development from those not educated about it.

“However, for those developers who I think take the time to understand the requirements, it's just part of doing business — like we have to have life safety access and we have to have public health protected.”