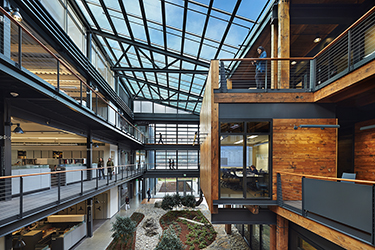 Photo by Benjamin Benschneider [enlarge]
Chilled sails and bricks of phase-changing goo make for a complex — but efficient — energy system at the Corps’ headquarters.

Engineers have spent a year monitoring energy use in the $68 million Federal Center South Building 12021, which opened in December 2012 and is headquarters for the Seattle District Army Corps of Engineers.

Why? They wanted to see if the LEED platinum building in the Duwamish area was performing up to its high expectations — and to make sure Sellen Construction would fulfill the energy guarantees it made on the building.

Tom Boysen, senior project manager at Sellen, said the team has had to make a few adjustments.

Boysen said for the first four months the building was 44 percent over target for energy use. They found control sequences were not working or weren't at optimal levels, and some of the equipment was not working as intended.

That led to a lot of tweaking.

Boysen said a lot of little things happen when you turn on a building for the first time, such as systems that decide when to turn boilers off and on.

Boysen said the team had to make changes once they saw Building 12021's systems in action.

Thanks to tweaking, the team hit the energy target by the fifth month and made up the deficit by the end of the year. That was a good thing because the General Services Administration, which owns the building, withheld $350,000 from Sellen's contract until the one-year energy goal was met.

During the energy monitoring stage, Sellen was helped by engineers and subcontractors specializing in mechanical, electrical and control systems.

Boysen said it helped that they used energy modeling throughout the design, and that the mechanical and electrical subcontracting teams were brought on early. 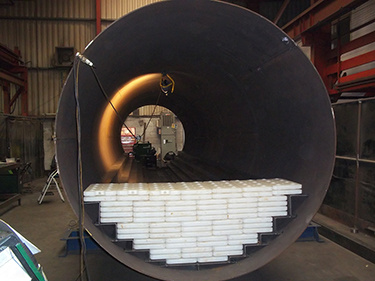 One sub, University Mechanical, not only produced system drawings, it also provided two building engineers during the first year of operations.

GSA had its own pair of building engineers from Total Systems Solutions, bringing them in about nine months after the building opened. The three months of overlap allowed University Mechanical's engineers to train Total Systems' engineers about the systems.

“This is not your father's 1960s pickup truck,” Boysen said. “This thing has at least four gears of cooling and two gears of heating.”

The tank is filled with two-foot-long bricks made of a goo-like substance. Boysen said the goo is a phase-change material that freezes and thaws at 55 degrees, so it acts like a battery for storing heat.

Boysen said phase-change materials are relatively new for this application, and he only knows of one company in the world that makes them.

Another technology used in the building is passive radiant chilled sails, which hang from the ceiling like light fixtures. The sails are made of extruded aluminum and radiate cold air when chilled by tubes filled with 58-degree water. Cooler air falls and circulates with warm air from computers and people below, creating a convection current.

The sails don't use fans so they aren't drafty, Boysen said.

Boysen said reducing energy use isn't just about systems; it's also about how people use electricity. His team did studies to see what devices get plugged in and used throughout the day.

At the end of the first year, the team recorded an Energy Unit Indicator score of 25 for the 209,000-square-foot space, which is in the top 1 percent nationwide. EUI lets you compare energy use in buildings of different sizes.

Boysen said the average Pacific Northwest building has an EUI of 106; new buildings are in the 40-50 range. Notable local exceptions are Bullitt Center, with an EUI of 12, and Rice Fergus Miller's architecture office in Bremerton, with an EUI of 19.

Sellen is still working on one last thing: the energy dashboard kiosk in the lobby.

The dashboard will show tenants how much energy they are using. Boysen said this helps people reduce energy use and think before they plug in. It should be finished by the end of the month.