The city of Bellevue has been planning for the transformation of the Bel-Red corridor for more than a decade. The area — bounded by Interstate 405 to the west, state Route 520 to the north, 148th Avenue Northeast to the east and Bel-Red Road to the south — was historically home to light-industrial buildings and suburban strip malls.

Following years of planning and “visioning” sessions with businesses, residents and other stakeholders, the city approved code changes in 2009 that set the stage for the Bel-Red corridor to become a vibrant, mixed-use, transit-oriented neighborhood. According to the city of Bellevue, the Bel-Red corridor by 2030 is expected to create 10,000 new jobs and add 5,000 new housing units.

Along with new jobs and residents, a Sound Transit light rail line will serve the Bel-Red area starting in 2023, and the burgeoning neighborhood will have new parks, trails, bike paths and other amenities. Another important element of the Bel-Red subarea plan is a focus on “redeveloping the Bel-Red area as a model of environmental sustainability” by restoring steams and rehabilitating natural habitat.

We were excited by the prospects of embracing this vision and incorporating it into one of our planned developments in this neighborhood.

Green building means different things to different people. We firmly believe that any focus on green building should take into account much more than what systems and products are used inside a structure. Protecting and preserving the natural environment is just as important as applying the latest sustainability practices to the built environment. 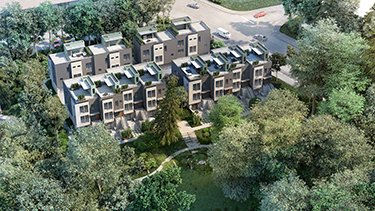 Located at 13601 Bel-Red Road, Park 12 is named for the 12 townhouses nestled adjacent to a private, protected park space. Park 12 is being built on an undeveloped 1.7-acre site containing a section of Kelsey Creek. Despite its exceptional location, this property sat untouched for many years due to its degraded conditions and its designation as a critical area because of its proximity to Kelsey Creek.

During the construction of Park 12, we are taking great care to improve the Kelsey Creek stream buffer and enrich the property’s urban wildlife habitat. The adjacent park space will act as a private wildlife conservation area that is safeguarded from future development through a native growth protection easement.

In close partnership with Wetland Resources and GCH Planning and Landscape Architecture, we set out to create a plan that would restore the existing riparian corridor and enhance a portion of Kelsey Creek and the stream buffer. Unbeknownst to many, Kelsey Creek serves as a migratory stream for a variety of fish including Coho, sockeye, Chinook salmon and steelhead trout.

Unfortunately, the property was unmaintained and abandoned for many years. In addition to trash and other debris, a large portion of the site within the stream buffer was previously dominated by invasive species such as Himalayan blackberry and holly. Dense invasive species like Himalayan blackberry tend to crowd out and prevent native shrubs and other herbaceous plants from thriving in the area.

To address these issues, our goal in developing Park 12 is to reestablish native plantings in the stream buffer. As part of our enhancement plan, all of the invasive plant species in the future park area will be removed and replaced with native Northwest plants species like willow, rosemary and Oregon grape.

The development of Park 12 will also conserve the existing natural hydrology and preserve the existing biodiversity by further protecting existing wetlands. Development will minimize disturbances to the onsite and offsite natural water system through grading that captures and slows runoff as well as onsite landscape-based water treatments for runoff from roofs and paved areas. 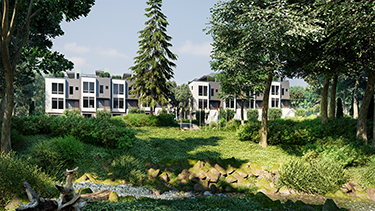 Park 12 capitalizes on the fact that Kelsey Creek runs through the site along the eastern property line. In fact, we used this natural feature as a focal point by orienting the buildings so they face Kelsey Creek. Furthermore, the townhouse interiors have large open floor plans with floor-to-ceiling windows that allow the outdoor oasis to be viewed from inside, creating a serene indoor environment.

The site’s design incorporates soft trails and outdoor gathering areas within the open area, creating a unique amenity for residents. We’re using birdhouses and fallen log features to create an atmosphere where residents can engage in the sights and sounds of the restored natural environment. At the same time, however, plantings and pathways are designed in a manner to discourage unauthorized use of the stream buffer area.

We recognize that the Seattle area will continue to grow in the years ahead. We made a conscious decision to underdevelop the site in order to protect this natural habitat and offer future residents a sanctuary in an otherwise rapidly urbanizing environment.

As stewards of the built environment, we embrace this growth. We feel it’s equally important that we also embrace the Bel-Red subarea plan by incorporating stream corridors as an onsite amenity and working to restore and enhance the ecological functions of these corridors.

We are tremendously excited for the future of the Bel-Red corridor, and we are pleased to have an opportunity to play our small part in achieving the city’s goal of redeveloping this area as a model for environmental sustainability.

Eugene Gershman is CEO and Ryan Grams is a principal with GIS International Group, a developer and builder of single-family, multifamily and mixed-use properties throughout the Puget Sound region.