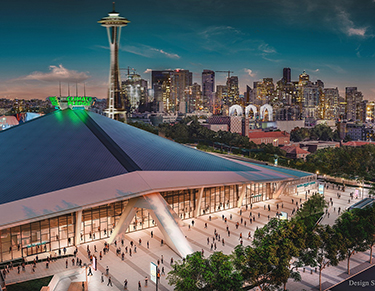 Images from Amazon [enlarge]
The arena at Seattle Center is undergoing a $930 million renovation that keeps the massive Paul Thiry-designed roof. 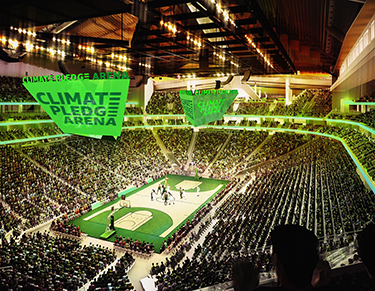 [enlarge]
Events held in the arena will become net zero through investments in forestry projects.

Amazon announced yesterday that it had secured the naming rights to the arena at Seattle Center, which is being renovated in time for the 2021 NHL hockey season.

Amazon Arena? Nope. The online giant is spending what is likely millions of dollars to name it Climate Pledge Arena. That seems fitting, as Amazon and arena developers Oak View Group and NHL Seattle say it will be the first net-zero-carbon-certified arena in the world.

“We've secured naming rights to the historic arena previously known as KeyArena. Instead of naming it after Amazon, we're calling it Climate Pledge Arena as a regular reminder of the importance of fighting climate change,” wrote Amazon founder and CEO Jeff Bezos in a blog post. “We look forward to working together with Oak View Group, a new Climate Pledge signatory, and NHL Seattle to inspire global climate action.”

To help reach the lofty goal of net zero, the group brought on Seattle architect and founder of the Living Building Challenge Jason F. McLennan as its lead sustainability consultant.

“One of the things I am most excited about is we got rid of all fossil fuels in this venue,” said McLennan in a news release. “It will be a zero-carbon arena. That's never been done before.”

The arena will be so “green” that fans traveling to events there are expected to generate 40% of its emissions. To offset that, the arena will buy carbon credits from The Nature Conservancy, which will help preserve farm and forest land.

“The next level is calculating all of the carbon emissions related to getting fans and workers to the arena for all events and providing offsets for that as well,” McLennan said.

The arena's new name refers to The Climate Pledge, launched in 2019 by Amazon and Global Optimism, which calls on other companies to be net zero carbon by 2040 — a decade ahead of the Paris Agreement.

Here are some of the ways the arena will get to net zero:

• All-electric operations will be powered with 100% renewable electricity from on-site solar panels and off-site renewable energy.

• Events will be made net zero through investments in forestry projects that will sequester any remaining carbon emissions from arena operations.

• Carbon emissions and sustainability performance of the arena and all events will be measured and publicly disclosed.

• All operations and events will be “zero waste” with compostable containers; at least 95% of all arena waste will be diverted from landfills.

• Rainwater will be reclaimed for ice rink use.

• Original 44 million-pound roof will be reused, significantly reducing embodied carbon of the building.

• At least 75% of the food served in the arena will be sourced locally; unused food will go to local food banks.

• No trash cans are planned; only compost and recycling bins.

• Zamboni ice resurfacers will be electric.

• 24 electric charging stations are planned for the underground parking garage, with the ability to convert the entire lot to EV.

As part of the agreement with Amazon, OVG and NHL Seattle will make annual contributions to The Climate Pledge initiative. Also, Amazon and OVG will form the Climate Pledge Arena Sustainability Advisory Council in partnership with community groups to support local environmental initiatives.

Tim Leiweke, CEO of OVG, said, “There is no question that the state of our planet is a critical issue for all of us. We have a responsibility to future generations to try to leave them with a better world. We love that Amazon is using its naming rights for a cause we care deeply about — this partnership is a visionary step for the facilities business and sport and music industries.

“Our goal is to be the most progressive, responsible, and sustainable venue in the world. It is not just about one arena — it's a platform for us to step up and heal our planet,” he said.

Amazon did not disclose how much it is paying for the naming rights, but said it will last at least a decade.

The 18,100-seat venue is expected to host 200 events each year, including NHL and WNBA games, live music and entertainment, and civic events.