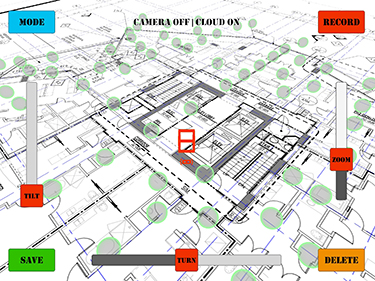 Image from Context VR [enlarge]
Dots on this Context VR screen represent 360-degree photos that can be opened by tapping on them.

This is no game: Virtual reality is taking hold in the construction industry.

Context VR is a mobile app that contractors and others can use for as-built records, remote walk-throughs, progress reports, estimating, safety training and facility management. The company plans to launch it on Thursday for phones and tablets running on iOS and Android.

Users of the app start by uploading the engineering drawings or floor plans of a building as pdf documents or images. Then they walk through the as-built space, taking photos from a 360-degree camera that interfaces with their phone or tablet to store the images in the cloud.

A user places virtual markers on the floor plan that correspond to his or her location inside the building. A time-stamped photo is taken from each of those spots and fed into the app to pin the photo to its position on the floor plan. Annotations can be added to each photo.

The end product can be displayed in a virtual reality viewer, such as Google Cardboard, to give other team members a sense of what it's like to be in the building. Older photos can be brought up in augmented reality mode to “see through” walls in the finished space.

Matt Glassman, virtual construction manager at PCL, said they have been testing Context VR for about two months on Tower 12 and the 2116 Fourth Ave. building, which was formerly called Potala Tower.

PCL is using the app to record project milestones, such as where rebar and post-tension cables were before being sealed in concrete, and the location of mechanical and electrical systems before they were hidden behind drywall.

Glassman said the app is simple to use and replaces a lot of photo documentation. It also is easy to share progress with stakeholders by giving them a virtual tour of the space.

“You can pin 360 photos to floor plans versus opening a folder that may have random files/random file names,” Glassman said. “When bringing up a floor plan within Context VR, it has all the docs and associated photo links, plus everything is indexed and organized. It is efficient, brings greater value to my clients, and makes my job a lot easier. It also eliminates the need to transfer large photo files, and it doesn't require a special 360-photo viewer to be installed.”

Using the app, work crews can identify trouble spots, photos become a time-stamped affidavit of condition to protect against claims and liability, and a birth record of the building is created for future maintenance and renovations/additions.

Dmitri Bouianov, Context VR founder and CEO, said workers can do a safety walk of the jobsite, taking photos as they go. That information can be used to show risks on the site to new workers.

“By the time they are at the construction site, they are already oriented to the site,” he said.

Sellen is testing Context VR on an office tower and a residential tower, both in downtown Seattle. “It's been helpful to see their solution,” he said. “Technologies are helping this product become more efficient.”

Barrett said pairing a 360-degree camera with a mobile app is more efficient because the photos don't have to be taken back to the office and uploaded onto computers. He said they also create a more holistic image capture.

Bouianov said the price of Context VR will be based on project size and the number of users. Most users will pay for a license for the duration of a project, he said.

Context VR started about 18 months ago with a focus on health care and nuclear facilities. Bouianov shifted the focus to construction about six months ago because the industry needs to streamline photo documentation.

“We're passionate about the construction industry,” he said.

Bouianov said there are a few other construction and real estate companies in the beta test, but declined to name them. He said Context VR plans to launch more products and advanced functions in the coming months.

Bouianov also heads Seattle-based Rocket Alien and previously worked for Microsoft and Expedia. Context VR operates out of Surf Incubator, which is in the Wells Fargo Building in downtown Seattle.