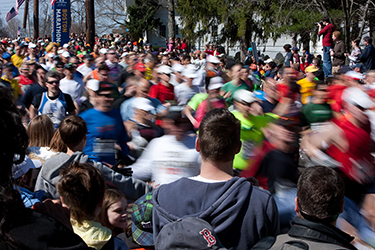 Image from iStockPhoto [enlarge]
Rival camps in the running world began snapping at each other's heels in March 2021 after the Boston Athletic Association, which still hopes to hold a truncated in-person edition of the footrace in October, said it would award medals to up to 70,000 athletes if they go the distance wherever they are.

BOSTON — Distance running, traditionally one of the world's most genteel sports, has been roiled by an ugly mid-pandemic squabble over who should get a shot at a coveted Boston Marathon medal.