At the Movies: Oldman makes an impressive Churchill in ‘Darkest Hour' 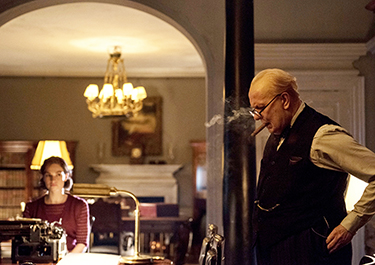 Words matter. That's one of the key messages of “Darkest Hour,” in which Gary Oldman embodies — fiercely and memorably — the legendary Winston Churchill, who rallied his country with soaring oratory when Britain's very survival was at stake.

But the same man who uttered indelible phrases like “I have nothing to offer but blood, toil, tears and sweat” — and many others — was also a human being, the film argues, with fears and doubts and insecurities and flaws. “Just be yourself,” Churchill's wife, Clementine (a briskly effective Kristin Scott Thomas) advises him as he heads off, full of jitters, to meet the king and become the wartime prime minister. Later, he raises a glass with Clementine, with a fervent wish: “Here's to not buggering it up.”

“Buggering it up” was certainly a risk — both for Churchill, and for Oldman or any actor attempting to embody the great man. It's hard enough to portray a revered real-life figure — and harder yet with such a larger-than-life persona, physically and otherwise. It won't be a surprise to fans of the skilled Oldman that he avoids mimicry or caricature, and it's an even better treat that he's able to so adeptly balance conviction with doubt, courage with fear, and gravity with humor. (Kudos are due as well to the superb makeup by Kazuhiro Tsuji, jowls and all.)

“Darkest Hour,” directed by Joe Wright and written by Anthony McCarten, focuses on one month in 1940 that saw Churchill rise to office and face down his political foes and a wary British monarch as he navigated the threat of looming war against Adolf Hitler's forces. Though Wright is known for his sweeping filmmaking in another war film, “Atonement,” here he focuses not on the beaches of Dunkirk but on dimly lit interiors like the underground war rooms at Westminster Palace, the halls of Parliament, and Churchill's own bedroom.

The film is, in a sense, a companion piece — by way of timing, at least — to Christopher Nolan's “Dunkirk,” released in the summer. While Nolan focused on the action, Wright focuses on the talk — specifically how Churchill, in the words of one frustrated opponent, “mobilized the English language and sent it into battle.”

He wasn't the first choice to be prime minister — not of his party, and certainly not of a skeptical King George VI (an excellent Ben Mendelsohn). But Parliament, as we learn at the beginning of the film, had lost confidence in the ailing Neville Chamberlain, and Churchill was a compromise solution.

He enters office as France and Belgium are on the brink of falling to the Nazis, and most of the British Army is stranded at Dunkirk. The new prime minister is forced to make an agonizing decision: try to negotiate a dubious peace, as Chamberlain desired, or fight — and risk the deaths of a generation of young British men. He's hated by Chamberlain and his sidekick, Lord Halifax, and doubted by the king, who (initially) finds him scary and unpredictable.

It's fun to watch the lunch meeting between the restrained king and Churchill, a man of great appetites — and a famous thirst. When the king asks how he can drink during the day, the prime minister replies: “Practice.”

There are many such moments of humor, including when Churchill first meets his new young secretary, Elizabeth Layton (Lily James), and inadvertently flashes his privates under his nightshirt. Or when he warns her as he exits the shower: “I'm coming out in a state of nature!” He's also shown on the toilet, shouting out that he cannot speak to the Lord Privy Seal because he is “sealed on The Privy.”

Despite such comic moments, which Oldman attacks with gusto, the film's mood is urgent and dire. The United States cannot help because of neutrality agreements; in a dispiriting phone call with Franklin D. Roosevelt, the U.S. president notes: “It must be late there.” Churchill replies: “In more ways than you can possibly know.”

Ultimately — as we all know — Churchill decides to fight on, and to declare “We will never surrender.” What gets him there? Partly, a ride on the London Underground. The prime minister decides to ditch his aides and take the Tube to Westminster, and on the way, to chat with some commonfolk. To a person, they agree with him that the country must never surrender to the forces of evil.

There are two problems with this scene. First, it's rather corny. The second is that it never happened. The filmmakers do warn that some material has been fictionalized. But some may be disappointed to learn that one of the most pivotal scenes in the film was manufactured.

Oldman's performance, though, which has launched him to the forefront of awards season chatter, triumphs over any such qualms. The last few years have seen a number of notable Churchill interpretations. Oldman has set the bar higher still.