At the Movies: A commanding turn from Viola Davis in ‘Widows' 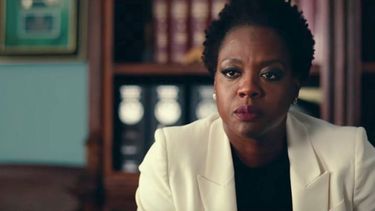 Who better to stare down the camera, and every seedy character the city of Chicago has to offer, than the incomparable Viola Davis?

When you think of the wives and girlfriends of criminals and mobsters in cinema and television, what or who comes to mind? Kay Adams? Elvira Hancock? Skyler White? They are either victims of a man's misdeeds or end up becoming part of the problem. They might get fancy jewelry or a big house, but they are the ones who get shut out of the room. They get greedy. They get addicted. They get killed. And, as an unwritten rule, they are secondary.

It's part of the reason why Steve McQueen's “Widows “ is such a welcome cocktail: The wives are the ones in the spotlight. Their husbands, the criminals fetishized by so, so many movies, are the ones who die at the beginning.

In his first film since the Oscar-winning “12 Years a Slave,” McQueen has gone in a very different direction with this Lynda La Plante adaptation. Widows” is a B-movie thriller with an all-star ensemble and a dusting of art house cred. McQueen co-wrote it with “Gone Girl” author Gillian Flynn and it is dark, relentlessly intense and crafted for mass audience appeal. And who better to stare down the camera, and every seedy character the city of Chicago has to offer, from corrupt legacy politicians (Colin Farrell and Robert Duvall) to truly terrifying gang muscle (”Get Out's” Daniel Kaluuya), than the incomparable Viola Davis?

Davis plays Veronica Rawlins, a well-heeled teacher's union representative who is married to a very powerful and very bad man, Harry Rawlins (Liam Neeson). Harry has done well in a corrupt Chicago — the passionate couple share a sleek high-rise Lake Shore Drive apartment, a driver and all the niceties that sort of real estate implies. But when he and his crew (including Jon Bernthal and Manuel Garcia-Rulfo) get gunned down during a robbery gone wrong, Veronica is the one the aggrieved come after to collect.

Unfortunately for her, the crew her late husband was stealing $2 million from are also a powerful, murderous and, now, angry, rival set of criminals. They're led by Jamal Manning (Brian Tyree Henry) and his brother Jatemme (Kaluuya), and have until this point managed to keep the peace with Rawlins' crew. Jamal is running for alderman of his South Side neighborhood that is a stronghold of a Chicago political dynasty, the Mulligans (Duvall and Farrell) that maintains property there only as a front — and the Mannings need the money to take them down. One on-the-nose, but startlingly effective, sequence, shows Jack Mulligan's drive home from the projects to his own gilded, heavily armed part of the neighborhood. This is just context for what's going on with Veronica and it will all come together eventually, with some good twists and turns in the mix.

Jamal threatens Veronica to collect what was stolen and she decides to step into Harry's shoes and enlist the widows of his crew to help. There's Linda (Michelle Rodriguez), a mother of two whose Quinceanera shop has been repossessed because of her late husband's gambling habits, and Alice (Elizabeth Debicki), a woman who has been mistreated by everyone in her life, from her husband to her mother, who suggests she become a high-end sex worker. All are basically riffs on the typical film “victim wife,” only here they get to take charge and plan and execute the elaborate heist. Veronica is a tough boss and pushes Alice and Linda, and eventually Belle (Cynthia Erivo), to realize their own power as they amusingly use their skills, whether plain street savvy or just taking advantage of the fact that they are underestimated and overlooked simply by being women (a point that is much better made here than in “Ocean's 8”).

The ensemble is a blast. Everyone gets their moment and you come away feeling like you really got to know most of them, but it is Davis and her unforgettably searing intensity (and killer wardrobe) who owns “Widows” from start to finish.

McQueen builds tension masterfully throughout, although is so sprawling that at times you're left wondering whether this might have been better told as a limited television series. Then again, is it worth complaining about relative brevity when done this well?