Emerald Communities, a nonprofit senior housing and services organization based in Redmond, hired Diana Jamison as vice president, chief financial officer. Jamison will be responsible for the overall strategic and operational aspects of finance, accounting and information technology. She will work closely with the president and CEO of Emerald Communities, senior management, the board of directors, residents and numerous community partners to ensure Emerald Communities and its senior living properties, Heron's Key in Gig Harbor and Emerald Heights in Redmond, all meet their financial and business goals. Prior to joining Emerald Communities, Jamison had nearly two decades of experience in nonprofit senior housing organizations. She brings extensive experience in strategic leadership, financial planning and analysis, reporting, financial modeling, risk management, accounting and team leadership.

Curator, a Seattle-based public relations agency specializing in lifestyle and consumer brands, announced that Elsa Fletcher has joined the firm as a Seattle-based assistant account executive. Additionally, Jessica Christopher, who works out of Bend, Oregon, and Xiamara Garza, who works near Phoenix, Arizona, have been promoted to account supervisor and account executive, respectively. All three will be responsible for the ideation and implementation of communication strategies for clients including PCC Community Markets, Gesa Credit Union, Qapital, Washington's Lottery and Ziply Fiber. Christopher joined the agency in 2021 as a senior account executive. Prior to joining Curator, she worked at Allied Global Marketing in Philadelphia. Garza joined Curator in 2021 as an assistant account executive after interning with the company during her senior year at Northern Arizona University. Fletcher is a recent graduate of the University of Oregon. Previously, she interned at an eco-friendly hair care and beauty company serving as a social media intern as well as a marketing intern at commercial real estate firm. Curator was founded in 2009. 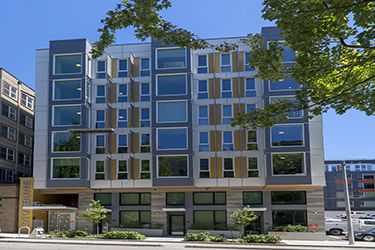 NAIOP's annual Night of the Stars gala comes on Nov. 4, at the Hyatt Regency Bellevue. Voting continues through Oct. 5, and a few names are popping early. John Pietromonaco of Pietromonaco Jackson Properties will be inducted into the Hall of Fame. The 80-unit Chief Seattle Club addition in Pioneer Square has been named Community Impact Development of the Year. The 66-unit Ellie Passivhaus in Lower Queen Anne has been named Sustainable Development of the Year. And the Office Brokers of the Year are David Rothrock and Doug Barrett of Meriwether Advisors.

With its main office in Austin, Texas, StoryBuilt has been active in our market since 2015. It counts many townhouse projects among its local developments. And it has a Columbia City apartment project, the 364-unit Josephine, that's nearing a master use permit. With another half dozen smaller projects also in varying phases of development, the firm's local headcount has risen to 31 employees. And they have a new home in the Original Rainier Brewery complex. Ben Rutkowski leads the local office, and said in a statement, “We're thrilled to move into our new office space in Georgetown, a neighborhood that we know and love. We are betting big on Seattle, and the new office provides us the space we need to collaborate and continue to grow the team.”

A 20-year veteran at the company, Coldwell Banker Bain's Robert Burns has been appointed president, the firm recently announced. He's held multiple titles with the brokerage over the years, and has most recently served as regional vice president of the greater Chicago area. He started selling real estate in Minnesota, at the age of 20. CBB didn't say if he'd be based in its Bellevue headquarter or not. Greg Macres is the executive vice president for the Western Region; he praised Burns' “passion for agent growth, strong business ethic and vast cross functional expertise.”

A group of five new valuation experts has joined JLL, the firm recently announced. Aaron DeCollibus makes the move from Walker & Dunlop. Keith Lee comes from PGP Valuation. Andrew Chapman and Derek Mason depart from Colliers. And Jimmy Ryerson hails from Integra Realty Resources. Tony Lenamon leads the JLL valuation practice. He said in a statement, “While we already had a small-team based in Seattle, this expansion allows us to meet the needs of clients across additional property types and continue to offer best-in-class service through a combination of leading technology and experienced appraisers.”

Frazier Healthcare Partners, a private equity and venture capital firm focused on the health care industry, promoted Andy Caine to the new role of chief operating officer/partner for the Center of Excellence team. Caine joined Frazier's Growth Buyout team in the spring of 2018. In his new role, he is managing and leading Frazier's internally dedicated Center of Excellence team that provides Fortune 500 talent in support of its portfolio companies, including in the areas of human capital, information technology, artificial intelligence, data analytics, revenue cycle, M&A integration, finance, legal, and operations. Additionally, Frazier hired of two new partners in the Center of Excellence: Jeff Schwaneke, partner, finance and operations; and Michael Miraflores, partner, mergers and acquisitions. Founded in 1991, Frazier Healthcare Partners has offices in Seattle and Menlo Park, California, and invests broadly across the U.S., Canada and Europe.

On Friday, Starbucks will open its 6,000th store in the Chinese mainland at Shanghai Lippo Plaza. The company opened its first store in Shanghai more than 20 years ago. The new store marks Starbucks' 1,000th in Shanghai, making it the first city in the world to pass that milestone. The latest addition to Starbucks' portfolio of “greener stores” also features sustainability solutions and digitalized operations. The Shanghai Lippo Plaza store's back-of-house operations will have internet of things sensors and automation tools to simplify routine stocktaking tasks. Big data and machine learning algorithms have also been deployed to optimize inventory ordering and labor scheduling. These technologies have been scaled to all stores in operation market-wide, as the company continues to advance its digital transformation agenda. Starbucks expects to operate 9,000 stores across 300 cities in China by 2025.

Spokane-based Clearwater Paper elected Jeanne Hillman to its board of directors, effective Saturday. From May 2019 until her retirement in March 2020, Hillman was vice president of enterprise technology and governance at Weyerhaeuser. Prior to that, beginning in 1984, she served at Weyerhaeuser in many roles, including as vice president, chief accounting officer, and vice president of finance operations for a wood products business improvement initiative, where she was responsible for strategic planning, capital investment, and multiple acquisitions and divestitures. Clearwater Paper manufactures consumer tissue, away-from-home tissue, parent roll tissue, bleached paperboard and pulp at manufacturing facilities across the nation. The company is a supplier of private brand tissue to retailers, including grocery, club, mass merchants and discount stores.