LeoStella, a specialized satellite constellation design and manufacturing company, has expanded its leadership team with the addition of Mike Kaplan as vice president of business development. Kaplan will bolster LeoStella's new business and customer efforts. Kaplan brings more than 40 years of experience in the space industry, with positions at both government and private organizations. He has served in senior leadership positions at NASA, Boeing, Raytheon Technologies, Ball Aerospace, Space Systems Loral, and most recently, Belcan. Kaplan's work has involved leading teams in the development of technologies such as spacecraft subsystems, spacecraft buses, planetary landers, and robotic satellite servicers. Kaplan is an associate fellow of the American Institute of Aeronautics and Astronautics, a member of the AIAA Small Satellite and Space Systems Technical Committees, Space SMART think tank, and a senior member of the Institute of Electrical and Electronics Engineers. Based in Tukwila, LeoStella is a joint venture between Thales Alenia Space and BlackSky.

T-Mobile and Big Brothers Big Sisters of America announced a new partnership that makes access to T-Mobile's Project 10Million, a $10.7 billion initiative focused on providing students free internet connectivity, even easier. Through the collaboration, the more than one hundred thousand students who are in Big Brothers Big Sisters' network of 230 agencies across 5,000 communities will be able to learn about Project 10Million, and eligible households will now be able to more easily register for the program's free internet and a mobile hotspot that provides 100GB of data per year for five years. Parents and guardians of eligible K through 12 grade students will find the tools to enroll in Project 10Million at http://www.t-mobile.com/bbbs or in-person through their Big Brothers Big Sisters match support specialist. School administrators and educators can learn more about Project 10Million and apply for their district at http://www.t-mobile.com/p10m. Based in Bellevue, T-Mobile provides services through its subsidiaries and operates its flagship brands, T-Mobile and Metro by T-Mobile. Founded in 1904, Big Brothers Big Sisters of America is the largest and most experienced youth mentoring organization in the United States.

Over three years back, ScanlanKemperBard of Portland paid over $38 million for the Original Rainier Brewery in Georgetown, at 5624 - 6004 Airport Way S. Now JLL has announced that it secured a nearly $36.5 million bridge loan last month. JLL's Tom Wilson and Zachary Kersten led the effort. Public records indicate the lender is UBS Bank. The new money replaces the original 2018 loan from Marathon Asset Management. JLL says the floating-rate loan has a three-year initial term, with two one-year extensions. The four-building complex has about 193,908 square feet, with some 39 small tenants including Fran's Chocolates. The oldest portions of the complex date to 1903, with many subsequent additions and alterations. CBRE represents the space.

Kidder Mathews announced its recent hiring of Heidi Ray. She becomes senior VP and director of engineering and sustainability in the firm's asset services division. She makes the move from Silverback Therapeutics. Kidder Mathews' Paul Klink said in a statement, “She possesses the technical and people skills that will help her lead our in-house engineering teams, and at the same time be a resource to our clients as they continue to reposition assets, especially in the life science sector.” Ray added, “I chose Kidder Mathews because it is clear they are focused on becoming best in class asset management professionals.” 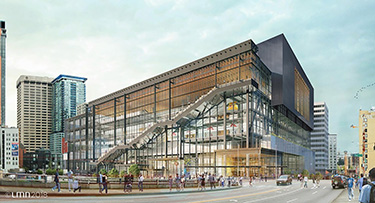 NAIOP's July property tour will provide an advance look at the downtown convention center expansion, aka Summit, and the just-opened high-rise Ovation apartments on the nearby Town Hall block. NAIOP warns that it'll be a full hard-hat tour for two sites still under construction. LMC's Ovation is now leasing and opening in phases. (Perkins Will and JTM Construction are behind that effort.) Summit is expected to open in January; that team includes Pine Street Group, LMN, Clark Construction Group and Lease Crutcher Lewis.) NAIOP says additional stops will be added; and the tour ends with a happy hour at Two Union Square. The event begins at Ovation at 1:30 p.m. Thursday, July 21. Details and registration: naiopwa.org.

The city of SeaTac is hosting its first Scrub Down event to pick up litter and remove graffiti. The Washington state Department of Ecology provided SeaTac with a grant to remove litter from on and off-ramps. SeaTac collected 1,700 bags of litter within the last year. A new Adopt-A-Street program was also created this year to encourage residents to partner together and clean their neighborhoods, with nine groups currently participating. The city also launched a GIS map that lets people track how much litter SeaTac crews and adopt-a-street groups have collected. The Great SeaTac Scrub Down will provide people with the opportunity to remove litter and graffiti from multiple places in the city. The event is a day of community service and starts at 9 a.m. on July 9 at Angle Lake Park. Volunteers will receive donuts, coffee, a free lunch from the local Kulan Halal Deli, a free T-shirt and live music by the Triple Treat Band. Register online at https://tinyurl.com/ScrubDown2022.

The Green Transportation Summit & Expo (GTSE) announced that Battle Motors will sponsor its 11th annual show from Aug. 16-18 at the Greater Tacoma Convention Center. The Green Transportation Summit & Expo is one of the West Coast's premier fleet modernization and sustainable transportation events. GTSE offers attendees an inside look at the latest in fleet technologies and innovation. Battle Motors, based in New Philadelphia, Ohio, is a leader in the development of electric vehicle technology and in the vocational truck industry, and produces work-ready diesel, compressed natural gas and fully electric chassis designed and manufactured in America.

Remitly Global, a digital financial services provider for immigrants and their families in over 160 countries around the world, appointed Rina Hahn as chief marketing officer. Hahn came to Remitly from Blue Nile where she served as the director of acquisition, overseeing global marketing for the company. She joined Remitly as director of digital marketing, and later becoming vice president of growth. Rob Singer, Remitly's previous CMO, will continue to serve in an advisory role through September 2022. Founded in 2011, Remitly is headquartered in Seattle and has seven global offices, including London, Cork, Singapore, Manila and Managua.

Glowforge, a Seattle-based company that created the 3D laser printer, announced it has raised $43 million in funding led by DFJ Growth, with participation from existing investors Foundry Group, True Ventures, and Revolution Growth. The funds will be used to increase investment in research and development and to expand its user base. Glowforge's technology helps crafters and handcraft entrepreneurs transform materials from wood to acrylic to leather into objects for the home, for gifts, or for sale. Glowforge was founded in 2015 by CEO Dan Shapiro and CTO Mark Gosselin.