Expedia Group announced that Julie Whalen will be Expedia Group's executive vice president and chief financial officer, effective September 26, 2022. She succeeds Eric Hart, who will remain with the company through October 1, 2022. Whalen will lead the company's global finance organization and financial activities including accounting, corporate development, financial reporting and analysis, internal audit, investor relations, real estate, tax, and treasury. Whalen comes to Expedia Group with more than two decades of finance experience. Most recently, she served as EVP and CFO of Williams-Sonoma, having progressed through positions of increasing responsibility in Williams-Sonoma's finance organization since joining in 2001, including 10 years as CFO. Whalen has served as a member of the Expedia's Board of Directors and Audit Committee since June 2019. While she has resigned as chair of the audit committee, she will continue as a member of the board of directors following her appointment. Expedia Group is headquartered in Seattle.

Lisa Powell has joined MultiCare Health System as senior vice president and chief human potential officer, where she will support more than 20,000 employees and more than 1,800 staff providers. Powell brings more than 20 years of health care human resources experience. The past 13 years she worked at Providence Health and Services in Portland, where she served as the vice president and chief human resources officer for the Oregon region. For the past two years, Powell served as the interim chief human resources officer for Providence's Alaska region. Joining MultiCare brings Powell back to Tacoma, where she started her career as the human resources director for Community Health Care. Powell earned a Bachelor of Arts in psychology from Lewis & Clark College in Portland, and a Master of Business Administration from City University of Seattle. She is also a member of the Society for Human Resource Management. MultiCare is a not-for-profit health care organization, and today is the largest community-based, locally governed health system in the state of Washington.

Gonzaga University is launching the Center for Lifelong Learning to offer continuing education, professional development, and personal enrichment programs to the public. Programs and certificates available through the new Center are designed to meet the needs of those who are currently working and seeking to advance into leadership roles, those who want to start a career, and those who desire to grow and learn, no matter what stage in life. The Center for Lifelong Learning partners with departments across campus to offer a wide-range of non-degree programs, including webinars, workshops, professional certificates and consulting services. Current programs include design thinking, servant leadership and women's leadership. Gonzaga also offers a Certificate in Foundational Leadership and a Certificate in the Business and Legal Aspects of Wine; additionally, the university will be launching a Certificate in Healthcare Leadership in January 2023. The Center plans to add more programs in the near future, including in the areas of engineering, business, education and climate studies. Further information is available at Gonzaga.edu/keepgrowing.

William Hughbanks joined Gordon Rees Scully Mansukhani as senior counsel in the firm's Spokane office. He joins the Construction practice group. Hughbanks focuses his practice on complex commercial litigation with an emphasis on construction related matters. He regularly assists clients at the outset of a construction project by reviewing, negotiating and developing contract documents to protect the clients' interest. He also counsels his clients in preparing claims and evaluating liability when a dispute arises on a project. He most recently served as president and CEO of the Inland Pacific Chapter of Associated Builders and Contractors. Hughbanks handles matters before the federal and state courts of Washington, Idaho and Montana and also in administrative courts of those states. He earned his law degree from Gonzaga University School of Law. Founded in 1974, Gordon Rees has offices and attorneys in all 50 states.

North Seattle College has earned a STARS Silver rating in recognition of its sustainability achievements from theâ€¯Association for the Advancement of Sustainability in Higher Education (AASHE). STARS, the Sustainability Tracking, Assessment & Rating System, measures and encourages sustainability in all aspects of higher education. With more than 900 participants in 40 countries, AASHE's STARS program is recognized for publicly reporting comprehensive information related to a college or university's sustainability performance. Participants report achievements in five overall areas: 1) academics 2) engagement, 3) operations, 4) planning and administration, and 5) innovation and leadership. AASHE is an association of colleges and universities that are working to create a sustainable future. It provides resources, professional development and a network of support to enable institutions of higher education to model and advance sustainability in everything they do, from governance and operations to education and research.

Madrona, a Seattle-based venture capital firm, announced it raised $690 million across two oversubscribed funds for technology startups based in the Pacific Northwest and beyond. With more than 25 years of experience building companies with founders from pre-seed onward, 100% of existing institutional investors supported the firm's new funds — $430 million Madrona Fund 9 and $260 million Acceleration Fund 3. Madrona Fund 9 will focus on its strategy of supporting Pacific Northwest-based pre-seed, seed, and Series A founders to help them build and scale throughout their company journey. Historically, over 80% of Madrona's core fund portfolio companies are based in the Pacific Northwest. Acceleration Fund 3 will focus on investing in teams that have found product-market fit, generally at the Series B or C stage, and are at a growth inflection point. About half of Madrona's Acceleration Fund companies are in major tech centers across the country, including Silicon Valley, New York City and Salt Lake City. This news follows the appointment Karan Mehandru as Madrona's new managing director. Mehandru, an experienced venture capitalist with strong ties to Seattle, will be based in Madrona's new Palo Alto office. 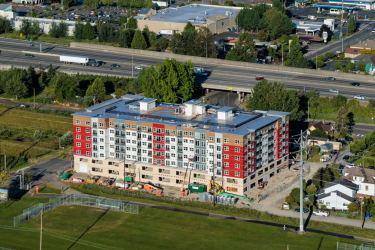 Developers GIS International Group and DMG Capital Group announced a ribbon cutting next Monday at 11 a.m. for their new 157-unit Madison Plaza in Kent. Also on hand will be dignitaries from the Master Builders Association of King and Snohomish Counties. GIS, which is led by Eugene Gershman (and who'll attend the ceremony), built the seven-story project, with IHB Architects as the designer. Mayor Dana Ralph will also be on hand. Thrive Communities will manage market rate and workforce-priced apartments. GIS says that amenities in the Built Green-certified project include two levels of retail, fitness center, game room with lounge area, bike roof, dog run and a rooftop gathering space. The apartments are about a 15-minute walk east to Kent Station.

Dermody Properties announced the recent hiring of Benjamin Seeger as Northwest region partner. He makes the move from Amazon, where he worked in last-mile logistics. Dermody, of course, builds precisely those kind of buildings, with Amazon among its past tenants. Most operate under the LogistiCenter rubric. Seeger said in a statement, “I am thrilled to join the experienced and talented team at Dermody Properties, and to contribute to this fast-paced and dynamic region within the portfolio.” He'll work out of Dermody's Bellevue office with Phil Wood. In addition to his logistics background, Seeger is a real estate attorney with experience in acquisition, financing and development.

Dayna Dealy has been promoted to VP of development for our region at Skanska, the firm announced late last month. She's been with the firm for four years. Its Charlie Foushe said in a statement, “Dayna has been an integral part of the Skanska team and a vital driver in our work. Thanks to Dayna's exceptional work, we are one step closer to starting The Kaye and delivering the project to the Belltown community.” That 30-story, 323-unit project, at 2208 Fourth Ave., received its master use permit in May. A demolition permit appears near, and Skanska, acting as its own builder, will proceed with phased construction permits. VIA Architecture and Grzywinski + Pons are the designers.

New crane in the Triangle

There's a new crane swinging over the Denny Triangle, operated by Centreville Construction. The latter is an arm of Concord Pacific, also of Vancouver, B.C., which is partnering with local shop HB Management on what had been known as Seattle House. That long-brewing 45-story project at 2300 Sixth Ave. was once announced to be condos, then more recently pivoted to a possible 1,130 rentals. Excavation for the underground parking was completed during the pandemic, then the half-block project lay quiet for well over a year. Fellow Canadian firm IBI Group is the architect for the two-tower plan. There's no announced date for completion.