Triad, Goodman are back with Colman Tower plan 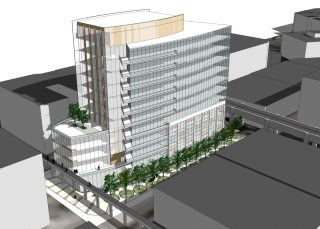 Triad Development is having another go at developing Colman Tower on a full-block site it owns at Western Avenue and Columbia Street, near Pioneer Square.

Triad, along with Goodman Real Estate, wants to build a 14-story office building that is similar to a proposal it put on hold after a key tenant backed out amid dot-com bust.

The design got a harsh reception from the Downtown Design Review Board, though it did eventually win approval after modifications. Yet Maveron, which planned to lease the top half the building, decided it no longer needed the space.

More than five years later, the site is still a parking lot. But times have changed.

“The market seems to be headed in the right direction from an occupation standpoint and a rent growth standpoint,” said Goodman Real Estate President George Petrie.

No tenants have been signed, he said, but “the building is just about the right size — 170,000 square feet — to garner a lot of interest.”

He said the property is also the last remaining waterfront site can that be developed. The site is one block from Alaskan Way.

The project faces its first early design guidance meeting on Aug. 22. The meeting will be held in City Hall at 5:30 p.m.

The preliminary design is “slightly modified” in scope and scale compared with earlier proposals, Petrie said.

Seattle's Weber+Thompson, the original architect for Colman Tower last time around, has produced a “timeless” design, according to Petrie, for the block, which serves as a transition between Pioneer Square, the waterfront and the central business district.

Weber+Thompson's design prior to Gwathmey's involvement had a more traditional brick-and-glass facade, intended to complement neighboring historical buildings. The firm's most recent design is more contemporary, with concrete, steel and glass.

“We want a modern building that is ‘of our time,' but that is also contextual and sympathetic to the highly detailed masonry, stone and steel buildings that exist in the neighborhood already,” said Blaine Weber, principal at Weber+Thompson.

The offices will be loft-style with exposed structural elements, high ceilings and floor-to-ceiling glass. Retail is planned for street level as well as on the second floor, where stores will open out onto a pedestrian overpass used by ferry passengers.

Weber said the building also will have a strong presence on Post Alley, where it will sit across from several businesses, including the Owl n' Thistle Irish Pub.

“There will be lots of retail on Post Alley, creating a rich pedestrian environment there,” he said.

Weber emphasized the project is in its early design phase, and said the design will evolve as the project goes through the city design review process.

The building is slated for completion in the first or second quarter of 2008.