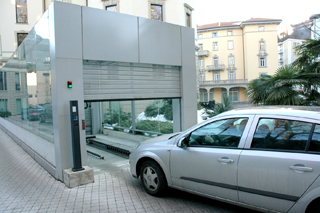 It's a prime location at the fringe of the popular Belltown and South Lake Union neighborhoods and just a few blocks from the planned Bill & Melinda Gates Foundation headquarters.

But the site where Laconia Development intends to build a residential high-rise is small — 10,700 square feet — and it's triangular, not the traditional square or rectangle.

The size and geometry translate into fewer parking stalls per floor, so the developer must dig deeper — and each level going down costs more than the last.

Laconia would have to go down 11 to 12 levels to accommodate the 283 stalls it wants at a development it plans at Sixth Avenue and Wall Street. Residents of the 32-story tower would have to navigate those levels in their cars, an exercise Laconia was concerned would make some “nauseous,” according to Development Manager Michael Carey.

“We felt that people would see that as an issue,” he said.

So the firm is going with a computerized fully automated parking system, which requires no ramps or aisles, and results in fewer levels of very compact parking.

The Swiss-Park USA system Laconia will use works like this: A person drives into an entry port, leaves his car, then swipes a key and enters a PIN code that starts the system. An elevator then takes the car to a floor with an open slot and a dolly grabs hold of the vehicle's tires and places it in the slot.

“There are a lot of smaller sites in Seattle that I think until recently people thought 'they're not viable'” despite some having great views, said Weber, a senior principal with the Seattle-based Weber Thompson, which is designing the Laconia project. “I think this is one of the tricks in the toolbag that will makes these smaller sites more feasible.”

Intracorp Seattle has a more conventional site than Laconia's, but is “favoring” using the system in a 400-foot residential building it plans for the 1915 Second Ave. property, according to company President Mike Lierman. That project would have 350 to 400 units, with one parking stall per unit.

Intracorp already has a master-use permit to build to 240 feet, but is working to get the taller project entitled, an option made possible by zoning changes approved by the Seattle City Council in 2006.

The changes were designed to encourage density downtown, and as more developers take advantage of them “at some point conventional garages don't make sense anymore,” Lierman said. “It's not a practical alternative to continue to ramp down and down and down.”

Automated parking is not entirely new to the Seattle area, said Weber. Vintage Park and Hotel 1000 park cars using elevator systems, but they require 24-hour valets. The Cristalla condo complex's system isn't fully automated and it's homeowner operated. And in Bellevue the now-stalled 17-story European Tower condo complex, planned for an unusually small site, will have a vertical parking system.

Fully automated systems such as the one Laconia is using are popular in European cities and on the East Coast, where land prices are high, said Pedro Fernandez, a managing director with Swiss-Park USA.

He said the firm is starting to see more interest from West Coast developers, especially on sites that are “more tight and difficult to develop.” Two California residential projects are considering it and it is being used in Vancouver, B.C., at the Jameson House high-rise mixed-use project, where “the footprint is not large enough to have normal parking,” Fernandez said.

Automated parking mostly is used in residential buildings, but office projects use it too, with systems designed to accommodate peak demand, he said.

Proponents say automated parking has many pluses, including fewer damaged car doors and more security but they say it can meet with some market resistance.

“The waiting always comes up,” said Fernandez. “Developers are always concerned for example that the potential buyers are not going to be happy having to wait.”

At Laconia's project, two cars can be parked or retrieved at a time, a process that should take two to three minutes, about as long as a resident would spend getting a car themselves, Carey said.

Television screens and coffee carts will be provided to keep those waiting engaged. An attendant will be on hand to assist with the system and reminders will discourage people from leaving cellphones, keys and purses in cars.

But not everybody will be able to park in the Laconia development. The Swiss-Park system can't accomodate large cars, such as Hummers and really big sport utility vehicles.

Fully automated parking also isn't cheap. Swiss-Park charges developers $15,000 a car, and that's on top of the expense of constructing the garage.

The automated system will let Laconia dig down just 10, instead of 12 floors. But the added cost for the system make it a financial wash relative to conventional parking, Carey said. Still, the firm thinks residents will look favorably on a developer who saves them from having to corkscrew down many floors of parking.

Weber said developers will have to evaluate on a case-by-case basis whether such systems benefit them. But as Seattle grows taller he expects more will sign on.

“People will only drive so far into the center of the earth,” he said. “It's really a perception issue.”