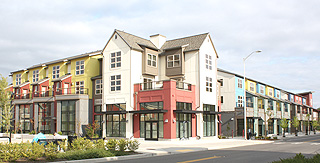 Salmon Creek, the fourth phase of rental construction at Greenbridge, has been completed and families are living in the 88 townhomes and apartments.

Greenbridge is King County Housing Authority's 96-acre master-planned community, which now has a total of 357 rental units. Another 111 units are being built with federal stimulus funding and are due for completion next summer.

GGLO Architects designed Salmon Creek and it was built by Synergy Construction.

Salmon Creek is on two parcels, one at the east corner of Roxbury Street and Eighth Avenue Southwest, the other just north of the White Center Heights Elementary School.

A coffee shop called Dubsea Coffee is set to open in a retail plaza at Eighth Avenue plaza later this fall.

The housing authority said nearly 60 percent of Greenbridge's housing units are occupied by residents who had lived in Park Lake Homes 1, which once occupied the site, or the nearby Park Lake Homes 2, which is being redeveloped.

Once the Greenbridge redevelopment is completed, the complex will have 468 units of affordable rental housing and about 400 homes targeted for sale to households whose incomes range from very low to moderate.

It has been certified as Three-Star Built Green. Biofiltration swales and narrower roads were added to reduce runoff and calm traffic.