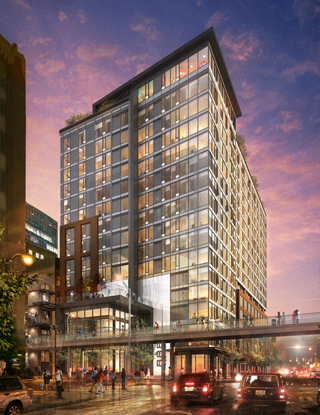 Image by studio/216 [enlarge]
Apartments in the tower at Western and Post will have exposed concrete ceilings, wood floors, and exposed mechanical systems. They will average 740 square feet and most will be open one-bedrooms.

Goodman Real Estate plans to start construction next spring on a 208-unit, 16-story apartment tower on the edge of Pioneer Square that will have a few micro apartments inside the garage and a structure that connects to the Colman Dock ferry terminal's pedestrian bridge.

The complex will be bounded by Western and Post avenues and Columbia and Marion streets. The designer, interior designer and landscape architect is Weber Thompson of Seattle. The structural engineer is Magnusson Klemencic Associates and the contractor is Turner Construction.

The construction cost is estimated at $50 million.

The apartments will have exposed concrete ceilings, wood floors, and exposed mechanical systems. They will average 740 square feet and most will be open one-bedrooms. The rest will be traditional one-bedrooms, two-bedrooms and studios.

The facade will be a glass and terra cotta curtain wall installed by Walters + Wolf.

Goodman Real Estate Founder John Goodman said the complex is one of several projects he plans to build in and around Seattle. He said he expects to build about 1,200 apartments downtown and in close-in neighborhoods in the next two years, and buy and develop another 800 apartments in the greater Seattle area.

“It's a great city, it's a fabulous city,” Goodman said. “It's creating jobs all the time.”

Besides the complex at Western and Post, Goodman said he will build another project with about 20 stories downtown and low-rise projects elsewhere.

He declined to say specifically where they will be located, but the firm has one apartment building going through the city's design review process. It is being designed by Studio Meng Strazzara for a site at 3606 Woodland Park Ave. N.

Goodman said apartment demand is being driven by the so-called echo-boomers (generally 18- to 32-year-olds) and limited supply due to tight construction lending.

“We think there's a window of opportunity as the vacancy rates have dropped considerably over the last six months,” he said.

Local apartment market research company Dupre + Scott projects the echo-boomers/Generation Y will create demand for about 60,000 apartments in King, Snohomish and Pierce counties over the next five years.

Goodman said his firm is getting apartment sites at big discounts, paying cash and closing quickly. Construction financing is not a problem “because I've been around for 30 years and never missed a payment to anybody,” said Goodman, a Seattle native.

The firm tends to be a longer-term holder and works quickly. “We don't have to make a presentation to anybody,” he said.

Research indicates that “youth-attractor” markets such as Seattle, San Francisco and New York, are rebounding fastest from the recession, said Don Fosseen, a Goodman director. Such cities have well-educated and well-employed professionals, mass transit and housing near jobs, and entertainment and restaurants.

“We think Seattle is going to come out of the downturn sooner and stronger than most of the other parts of the country,” he said.

The firm — and some other local developers — are also banking on a recent shift from home ownership to renting — a national trend.

The top floor of Goodman's Pioneer Square apartment tower will have amenities designed to attract young professionals, such as a party lounge with fireplace and media, a fitness studio, yoga room, lounge/library/business center, Xbox/theater room, and a game room with a bar, pool tables, poker tables and a lounge.

There will also be a wrap-around garden terrace with a reflecting pool, barbecues and a dog run.

The complex will have a little over 8,000 square feet of retail/commercial space facing Western and Post, and about 1,400 square feet in a two-story structure attached to the main building. Dan Foltz, lead designer for the project, calls this structure The Cube. Both floors of The Cube will have high ceilings. The first floor will contain the main lobby and the second will have retail. There will be open space on the roof.

An elevator and stairway at Marion and Post will connect The Cube to the ferry pedestrian bridge and to the street level.

The developer is considering stringing lights between the new building and the Colman Building to make Post more attractive and bring in shoppers.

“I own the Colman Building so I am interested in the success of both,” said Goodman.

In 2006, Goodman proposed a 14-story office building on the Post and Marion property, with retail at the street and second levels.

John Goodman said it's going to take awhile for the office sector to come back, with the exception of historic office buildings, which should do well.

Goodman is chairman of the board of Pinnacle, a Seattle-based international real estate company that also does construction management, develops military housing, is a pension fund advisor, joint ventures with institutional investors, and owns apartment units.

Goodman Real Estate is part of the Pinnacle family of companies, but the Goodman's assets are owned by John Goodman and Goodman's employees.