In October 2005, Arup joined the NBBJ-led design team with the goal of delivering a new campus for the Bill & Melinda Gates Foundation.

One of the critical first steps Arup embarked on with the Gates Foundation and design team was the generation of the campus Design Precepts — a guiding document covering all the foundation’s design aspirations, including its sustainability goals.

The underlying currents of the foundation’s sustainability goals were the creation of a superlative workplace for its staff and a respect of the greater environment.

The themes of the Design Precepts run through the three vignettes we are sharing here — the design of the rainwater harvesting system, the use of Arup’s SoundLab as a design tool, and the selection of a thermal energy storage system for the central plant. These are but a few snippets of the greater sustainability story that integrates the architecture, engineering and landscape with the client’s vision. 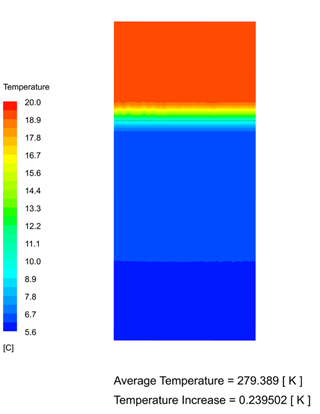 Image courtesy of Arup [enlarge]
Water temperatures are lower at the bottom of the TES tank.

Perhaps the greatest success is that which we have achieved together as a design and construction team — a wonderful building that meets the needs of our client, completed on schedule and within budget.

Early on in the design, Arup plumbing engineer Simon Reynolds claimed he could supply all the irrigation, toilet-flushing and water feature needs from the rainwater falling on the site. But to make this happen, a change in state legislation would be required to make it legal. And he would need a very, very big water tank!

Arup engineers, working with partner firms GGN and KPFF, had to verify how much irrigation water was needed for several acres of planting and how much evaporation was likely to occur from tens of thousands of square feet of water features.

Due to rain cycles and evaporative loss from open bodies of water, the site would need to be harvesting and storing water throughout the year, with the bulk needed from June through September. With a minimal amount of rainfall expected — even in Seattle! — during this period, our engineers cast around for other sources.

In idle conversation with mechanical engineer Pete Alspach, Reynolds inquired what the mechanical team was doing with the condensate water from the chillers.

“Discharging it to your drains” was the answer.

How much water is that likely to be? These drips and trickles turn out to be nearly a quarter-million gallons in the summer — just when they are most needed.

Where do you put a 940,000-gallon tank that’s the size of about 1.5 Olympic-sized swimming pools? In a corner of the basement that didn’t have anything else programmed for the space.

In the five years since that design session passed, the state clarified the rainwater harvesting legislation to make this legal, the city of Seattle issued a permit, and construction was finished.

Reynolds is proud to flush the toilets using rainwater when he visits the site. Total water saved per year is 2.5 million gallons!

Acoustic privacy can be a challenging proposition in an office environment.

Arup’s SoundLab is a 3-D calibrated, immersive environment or “listening room” using an ambisonic sound system which can simulate the acoustics of a space before it is built.

Early in the schematic design stage, acousticians brought a portable SoundLab to the Gates Foundation and NBBJ offices to demonstrate differing levels of speech privacy they could achieve with various wall partition constructions.

Listening to the performance certainly inspired some interesting discussions amongst the foundation and the design team regarding what the design targets should be. Actually “hearing” the design options certainly brought out passionate opinions!

The SoundLab helped the client and design team understand how a variety of design aspects influence the acoustic environment, which in turn affect both comfort and productivity in offices.

Knowing the acoustic performance was also a key driver as the design team was trying to decide which demountable wall manufacturer to specify for the wall partitions.

Identical prototype offices were mocked up from each manufacturer, and the acoustics team took real sound recordings of the acoustic performance and speech privacy level that each provided. For this sound modeling exercise, NBBJ and key foundation stakeholders visited Arup’s permanent acoustically isolated SoundLab in San Francisco to listen to the difference.

The acoustics team played back various conversations and typical office activities and allowed the stakeholders to listen to the acoustic privacy achieved — just as if they were sitting in the next office.

We provided a separate meeting room for the stakeholders so they could debate the issue and make a decision. They stayed in the office late into the evening before the decision was made. Our acoustics team leader Chris Field would interrupt them every 30 minutes to offer coffee, but really to eavesdrop on how the debate was going!

Early in the design process, the team evaluated the main cooling and heating system options for the campus using the central plant approach.

This approach had to meet the Design Precepts’ goals on energy and carbon reduction, integrate with the architecture and landscape, maintain cost effectiveness, and be durable and flexible for the campus’ 100-year design life.

Arup, with the support of construction partners at Sellen and McKinstry, evaluated a wide range of options, from the conventional packaged rooftop air-conditioning units to the more cutting-edge geothermal heat pump plant. In the end, Arup’s design alternate for the cooling system combining air-cooled chillers with a chilled water thermal energy storage tank proved to be the winner. It had the lowest total cost of ownership and best integration into the campus.

A chilled water thermal energy storage (TES) tank acts as a large buffer vessel or capacitor, allowing for chilled water production at night for use the following day.

This has several key impacts:

• Chiller plant capacity was reduced by about half from the peak loads, significantly reducing the chiller capital costs, space requirements and refrigerant charge. The tank absorbs the peak fluctuations in cooling demand without additional chiller capacity. The chiller cost savings went a long way towards paying for the tank itself.

• The ability to adapt the chilled water plant for future expansion or energy rate structure changes by simply changing the operational strategy of the TES tank.

Integration of the nearly 720,000-gallon chilled water TES tank into the project relied on locating it completely below grade. As a buried, massive concrete structure, the tank interacts with the cool ground and ground water.

Arup analyzed the tank design using both computational fluid dynamics software and dynamic finite element analysis. These analyses concluded that the tank needed to be insulated, but not from the ground as most of us suspected, but actually internally, to prevent heat stored in the concrete from warming newly chilled water.

The result is a 50-foot-diameter, 56-foot-high insulated concrete tank that can store enough chilled water to run the entire first phase of the campus without running a chiller during the day.

As the campus expands, the tank will operate in conjunction with the chillers during the day to provide cooling to the full campus build-out. The TES system is a vital component of the campus’ resource management strategy and is critical to its long-term operational flexibility.

Cormac Deavy is a principal at Arup leading the Seattle multidisciplinary engineering office. Deavy has a particular interest in the built form and the integrated solution of architecture, structure and building services. He was Arup’s project director and design leader on the Bill & Melinda Gates Foundation campus project.