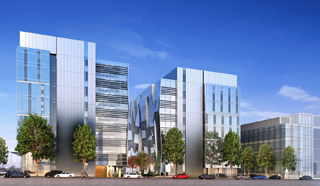 Image courtesy of Vulcan Real Estate [enlarge]
Sellen Construction will begin work on the first building, shown here in the center, at the UW South Lake Union campus. The building on the left may be built at a later date.

The University of Washington held a ceremonial groundbreaking yesterday to kick off the third phase of construction at its South Lake Union medical research campus.

Sellen Construction will begin work on the first of up to three new buildings on the block bounded by Mercer Street, Eighth Avenue North, Republican Street and Dexter Avenue North. The first building should be completed by the spring of 2013.

The 183,000-square-foot building is known as Building 3.1. It will house labs, offices and conference rooms for more than 400 researchers working in fields such as vision sciences, immunology, kidney diseases, rheumatology and infectious diseases.

The building will have a “ribbon facade,” which refers to the offset, wavelike bands of glass along the face. It was designed provide visual interest and to bounce natural light deeper into the building, according to Andrew Clinch, an architect at Perkins + Will. Other features include operable windows and a green roof, both of which are intended to help the building earn at least a LEED silver rating.

UW has a ground lease with Vulcan Real Estate, which owns the land. Financing will be through a nonprofit corporation set up by the National Development Council that will sell 63-20 bonds to raise revenue, then lease the building back to the UW for the 30 years it will take to pay off the debt.

Two more lab buildings totaling 359,000 square feet could be built later at an estimated cost of $350 million. The university has until 2015 to decide whether to develop the second building, and a later deadline for the third.

If the UW decides not to build the labs, it can direct the nonprofit corporation Washington Biomedical Research Facilities III to cancel the ground lease for the portion that is undeveloped.

The new buildings are the final phase of a renovation and construction program that began in 2003. The first phase was completed in 2004 and involved renovation of a 100,000-square-foot research building on a neighboring block.