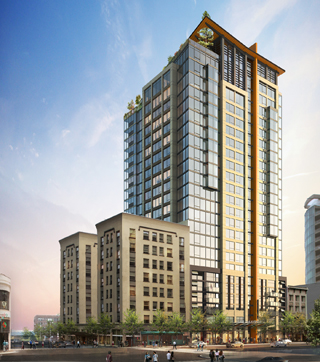 Image by studio216 courtesy of Urban Partners [enlarge]
Construction is expected to start early next year on this 24-story apartment project. This is the first time Goodman and Urban Partners have worked together to develop a project.

Goodman Real Estate and Urban Partners plan to start construction of a 24-story apartment tower near Pike Place Market during the first quarter of next year.

The midblock site is at 1915 Second Ave., between Stewart and Virginia, across from the Moore Theatre.

The building was originally planned as a condominium tower but like other downtown projects, it's been redesigned as apartments and will be among the first of these former-condo projects to start construction.

Total cost will be more than $100 million, according to Goodman Chief Investment Officer Don Fosseen. Construction should take about 18 months.

This is the first time Seattle-based Goodman and Urban Partners, which has offices here and in Los Angeles, have worked together to develop a project. A Goodman affiliate, Pinnacle, manages Urban Partners' new 37-story Aspira apartments in Seattle.

“We have a good relationship there,” said Fosseen, who hopes to build on Urban Partners' experience at Aspira and duplicate that at 1915 Second.

Urban Partners recently put the 325-unit Aspira at 1823 Terry Ave. up for sale. Urban Partners Principal Jim Atkins said the decision to sell Aspira is unrelated to the 1915 Second project.

Construction financing has not been finalized. Fosseen said there are several interested parties, but Goodman and Urban Partners haven't decided on a lender. He said the project will have other equity partners.

The site is now a parking garage with some retail at the base. Fosseen said Goodman and Urban Partners have not closed on buying the land yet but expect to soon.

Intracorp had planned a condo tower at 1915 Second, but walked away when the condo market collapsed.

The earlier project had an unusual design flourish: a tree poking through a circle in the roof. That remains part of the apartment tower, “but we've talked about several other iconic, conical-shape art forms in lieu of a tree,” Atkins said. “There are some practical issues with a tree, like what do you do if it dies?” Alternatives may better complement the design and programing for the building, he said.

Weber Thompson designed the condo tower and was retained to redesign it for apartments. Blaine Weber, the firm's senior principal, said the unit count was increased by 79 to 249 apartments. They will average about 710 square feet.

Atkins and Fosseen say the target market is younger people who work downtown and empty nesters.

Fosseen said rents will be consistent with competing projects, and there are a lot of them. Three other projects totaling about 1,330 units are under construction between Pioneer Square and Belltown.

Goodman and Urban Partners' project will have 3,400 square feet of retail, and above-grade parking for 138 vehicles. Atkins said at Aspira “we are finding people are willing and able to live without a car.”

Weber said the concrete structural frame is a performance-based shear-core with no perimeter moment frame. This means there is no up-turned or down-turned concrete frame at the perimeter, allowing for floor-to-ceiling glass.

The building skin will have precast white concrete accent panels and metal accents to “slenderize the tower and give it a more residential texture.”

The top floor will have amenities and recreational uses.

“The iconic roof at this community deck has a deep cantilever, which provides a bold finish to the top of the tower, and some protection from weather, so that the deck can be used year-round,” Weber said. The underside of the roof will be “dusted with light at night,” and an elliptical “oculus” in the roof will open to the sky.