By JERRY VANDERWOOD
AGC of Washington

Smith was cited for his work with AGC’s property committee, which oversees AGC of Washington’s real estate assets, particularly the AGC Building in Seattle. In his role as committee chairman, Smith leads the group that has kept the iconic AGC Building at an enviable occupancy rate of nearly 100 percent.

“Gary takes seriously his role to maintain the AGC-owned building and marina at South Lake Union as valuable assets for the association,” said 2011 AGC President Pat McGarry. “Gary has led an aggressive program to update the property. Tenants have choices, yet AGC maintains a very high occupancy rate because of Gary’s insistence on preserving the AGC Building’s status as a solid Class A property.” 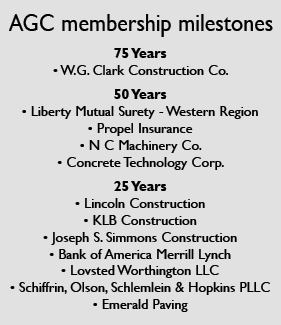 Smith was also honored for his leadership abilities. “AGC contractors justifiably have pride of ownership regarding the property and therefore strong opinions about what needs to be done to improve it,” McGarry said. “Gary is a skilled consensus builder and natural leader who got AGC Property Committee members to coalesce around an effective plan of action.”

Smith is a former member of AGC’s board of trustees, an officer for the Northwest Construction Consumer Council and a member of the Lean Construction Institute.

As Subcontractor of the Year, Sicklesteel was recognized for his efforts to educate the industry on crane safety.

“Not only did Thom devote his considerable expertise to represent the industry with the Department of Labor and Industries as it crafted crane-related regulations, he also donated countless hours educating the construction industry about the new regulations and crane safety in general,” said McGarry. “He has generously and freely shared his knowledge with others, and the end result is a safer industry.”

Sicklesteel’s firm, Sicklesteel Cranes, has long been a leader in safety. In 2011, the company received the AGC Build Washington Grand Award for Safety Excellence.

Lombroia was awarded Affiliate of the Year honors for her efforts to improve AGC’s education and networking opportunities.

“Annie facilitates Ashbaugh Beal’s generous sponsorship of AGC programs and she is personally involved in a wide range of AGC activities,” said McGarry. “She helps plan everything from golf tournaments to AGC Future Leadership Forum events. Annie is a consistent presence at AGC Southern District dinners where she helps to raise money for local food banks, and she helped launch the AGC’s new Women in Construction effort. It is not a stretch to say that Annie is the most widely known member within AGC. Simply put, Annie is an association’s greatest asset — an active volunteer.”

At the convention, AGC also presented a Membership Award for best growth and retention to AGC’s Northern District. Kyle Zender of Interwest Construction is the district representative and Liz Evans is the district manager.

Jerry VanderWood is director of communications for the AGC of Washington.