Alecta Real Estate Investment LLC has filed plans with the city of Seattle to build a 25-story apartment tower at 504 Terry Ave. on First Hill. 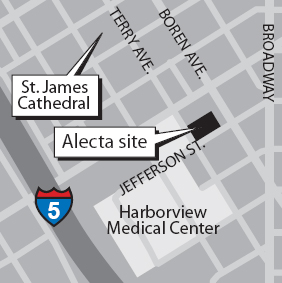 The half-acre site is across the street from Harborview Medical Center.

A small office building and a three-story apartment building would be demolished.

Weber Thompson is the architect, and the Justen Co. is listed as the developer.

Alecta is a Swedish pension adviser. It has purchased several other properties in the area. It acquired the apartment site from the Evergreen Environmental Development Corp. in 2010 for $5.4 million.

The Weber Thompson plans show a 240-foot-high concrete-frame building with 332 apartments and four levels of underground parking. A street-level residential lobby and 4,700 square feet of commercial space are planned, along with a rooftop deck and garden.

The apartments would be a mix of studios and one- and two-bedrooms, with an average size of 625 square feet.

Several design options were presented in the plans, but the architect's preferred option shows a structure with different heights above a podium.

An early design guidance meeting is tentatively scheduled for 6:30 p.m. May 2 in Seattle University's Casey Building at 901 12th Ave.