Holland Development is preparing to start construction next month on what will be Seattle's tallest apartment tower.

The 40-story project has yet to be named, but it will go up at the southwest corner of Pine Street and Ninth Avenue, west of the Paramount Theatre. 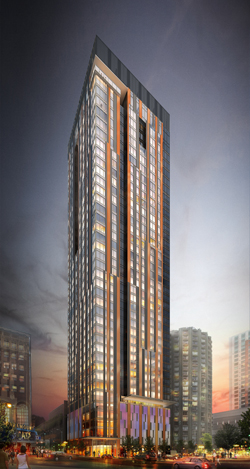 Rendering courtesy of Weber Thompson [enlarge]
The curtain wall of the podium will be back-lit to conceal above-grade parking and play off the marquee of the nearby Paramount Theatre.

“We believe everything is on track for a start in June,” said Tom Parsons, regional partner of Holland, which is buying the quarter-block site from Security Properties.

Weber Thompson is the architect and Susan Marinello is the interior designer. Holland Construction is the general contractor.

Parsons declined to name the project's equity partner, and said the construction loan will be final within the next 30 days. Cost of construction was not disclosed.

The Ninth and Pine project will have 386 units. It will be the fourth project Holland has under construction now, and the company plans two more starts this summer. All six Seattle projects are in the urban core and total 1,426 units. That's just 74 units shy of the total of all new units that opened in the tri-county area last year.

With demand and rents rising, apartment developers are planning a lot of projects. Dupre + Scott Apartment Advisors predicts 27,800 units will open between now and the end of 2015 in the tri-county area. In Seattle, developers plan to add 12,000 units over the next five years.

Parsons isn't worried about overbuilding. He said Holland does “a tremendous amount of research” about job growth, units in the pipeline and other factors.

The company is banking on strong job growth for the next two years, especially in downtown Seattle, thanks in large part to Amazon.com. He said institutional investors are disciplined and they “will begin tapping the brakes” when they think there's too much construction.

Security Properties got the project approved three years ago. Security Properties Chief Operating Officer Tim Overland said his company is selling to focus on projects elsewhere, including Columbia City, and “to maintain a defensive posture.”

This is not to say the project won't be successful for Holland, Overland said. He called Holland a credible buyer, and said that is why his company and its partner on the property, Northwestern Mutual, decided to sell to Holland. “Not just anybody can [build a project of this size].”

Overland said his company's strategic advantage is to develop in neighborhoods with “tight-knit communities” where permitting can be a challenge: “Columbia City fits perfectly into that.”

Security Properties is buying a site at 4801 Rainier Ave. S. from HAL Real Estate Investments. Security hired Bumgardner to design a project with about 195 units and commercial space, including room for a grocery that Overland said could be a PCC Natural Market.

Holland's Ninth and Pine site is 13,560 square feet, which seems tight for a 40-story tower, but Parsons said it works well for a tall-and-slender project. Several years ago, the city changed the zoning to encourage this type of development, which allows more daylight at street level and helps maintain view corridors.

Bumgardner designed the project Security Properties had planned for Ninth and Pine, and Weber Thompson retooled it “from the bottom up,” according to company principal Blaine Weber.

Floor plates will be 10,700 square feet, and the units will average about 800 square feet. Weber said the project is aimed at “a little more of an upscale renter” than competing projects with smaller units.

There will be 269 parking stalls on four underground and four above-ground levels.

About 3,200 square feet of commercial space is planned, and Weber said it could accommodate a fine-dining restaurant that wants to be across the street from the Paramount.

Weber said an art glass marquee with LED lights that change color will disguise the above-grade parking, and serve “as a nod to the Paramount marquee.”

The entire facade will be “playful,” he said, with orange and burnt sienna highlights intended to give it a “staccato effect.” Colored recesses in the facade will further break up the massing.

Amenities include garden terraces above the podium and on the 40th floor.

The first tenants should be able to move in 26 months after construction begins, Parsons said.