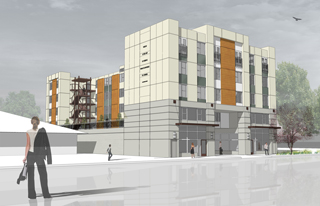 Rendering by Janette architecture | planning | design [enlarge]
Vision 5 is a five-story complex with 96 mini-suites that’s under construction at 8525 163rd Ave. N.E. in downtown Redmond. The suites will average 220 square feet and rent for $595 to $795.

A few years back, developer Robert Pantley noticed renters in Seattle were flocking to tiny new apartments getting built downtown.