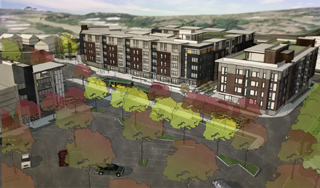 Rendering courtesy of Weber Thompson [enlarge]
King County Metro Transit owns the seven-acre site, which is in Bellevue and Kirkland.

Construction is under way on the first phase of a project that will add 242 apartments, 7,000 square feet of retail and a 532-stall commuter parking garage at the South Kirkland Park and Ride.

It will be at 108th Avenue Northeast and Northeast 38th Place, a block from state Route 520. The project is valued at about $65 million, including improvements to the transit center.

This is the first transit oriented development designed by the Seattle architecture firm Weber Thompson, and it is complex.

King County Metro Transit owns the seven-acre site, which is in Bellevue and Kirkland so it is covered by two sets of zoning rules. The project has three owners, two developers, three sets of green design criteria, and a variety of funding sources, including private, nonprofit, county, state and federal.

“There's a lot of communication that has happened that is making this project possible,” said Mindy Black, project manager for Weber Thompson.

Andersen Construction Co. has started building the commuter garage and the transit center improvements. The rest of the project is expected to get under way next August.

The project will have 184 market-rate apartments in a five-story building that Polygon Northwest will develop and own. The structure will have studios and one- and two-bedroom units, from 550 to 1,100 square feet, and two live-work units.

There will also be 58 low income apartments in a four-story building that the nonprofit Imagine Housing will develop and own. SMR Architects is designing that structure with studios and one-, two-, and three-bedroom units, from 500 to almost 1,200 square feet.

The buildings will be on a podium with 287 parking stalls for residents, and retail facing 38th. There will also be retail in Polygon's building, facing 108th where the site slopes.

Imagine and Polygon will own the podium condominium, Black said.

Renters in the Imagine building can't make more than 60 percent of the King County area median income, which for a household of three is $47,250.

Eric Evans, director of housing development for Imagine Housing, said the apartments will give some people in that income range the opportunity to live near their work. He commended Bellevue, Kirkland and King County for revitalizing the park and ride property.

Amenities in the Polygon building will include fireplaces and seating in a courtyard and lobby, and a club room with a demonstration kitchen, pool table and theater.

The Imagine building will have a top-floor recreation room.

Gary Prince, a senior project manager for King County Metro Transit, said the transit agency is paying a limited liability company made up of Polygon Northwest and Imagine Housing $7.4 million plus the land under their buildings as compensation for building the commuter garage and transit center improvements. The county values that land at $10 million.

Both apartment buildings will have a green roof, with Imagine's covering the entire surface.

There will be extra insulation, utility metering in the apartments, and geothermal ground source heat pumps for heating and cooling in the Imagine building, and energy and water saving features in the Polygon one.

The development will also have hillclimbs and plazas, and a landscaped pathway for pedestrians to get to the adjacent Yarrow Bay business district. There will be a private street with lights, trees and wide sidewalks between the housing and the commuter garage.

The commuter garage is on the Bellevue portion of the site. The structure will incorporate some surface stalls, netting an extra 250 spaces. A traffic signal will be added at 108th and 38th, and an exit at 38th so more buses can load and unload.

The park and ride is adjacent to low-rise office buildings in Kirkland and housing in Bellevue.

King County Metro Transit got Kirkland to change the zoning from office to allow housing. Bellevue amended a conditional use permit that allowed the surface stalls so the project could move forward, Black said.

Kirkland is trying to make 38th more attractive for pedestrians and retail, with storefronts near the sidewalk and parking in or behind the buildings, said Scott E. Thompson, a senior principal at Weber Thompson.

He said the park and ride project has the potential to revitalize the area, especially if it can add shops and restaurants that serve commuters and apartment dwellers.

Thompson said a number of park and rides in the region have the potential to be something else. “I see a lot of these properties getting redeveloped.”

Weber Thompson is the master planner for the entire project and the design architect for Polygon's apartments, podium and commuter garage. It also provided landscape architecture.