Amazon project team is creating new neighborhood, not a campus 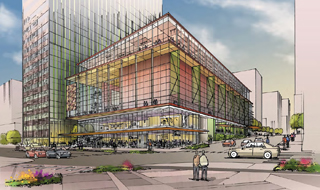 Image courtesy of NBBJ [enlarge]
The 3.3 million-square-foot headquarters will be built in three phases. The first phase will have a 37-story tower and this 2,000-seat meeting room.

Amazon.com says it wants to build a neighborhood, not a campus, in Seattle.

The online retail giant went against conventional wisdom when it first decided to expand in South Lake Union, versus locating in the suburbs as other tech companies have done in the past.

Now Amazon is preparing to begin shoring and excavation in June on the first of three towers in the Denny Triangle.

“Right from the beginning, the direction we received was ‘We want to build a neighborhood; we want to expand the neighborhood. We want to create a new area of the city that is not only beneficial to our employees, but to the surrounding community as well,'” NBBJ principal John Savo said during a real estate group's luncheon Thursday.

The 3.3 million-square-foot headquarters will be built in three phases. The first building, known as Block 14, will be done in late 2015, or early 2016. Timing of the second and third phases depends on Amazon's growth, but Block 19 will likely be the second phase.

NBBJ is the architect for the headquarters project, which is bounded by Sixth, Eighth and Westlake avenues and Blanchard and Virginia streets. 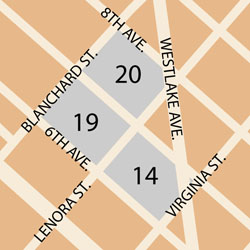 Jeff Guizio of Seneca Group, which is advising Amazon on development, and Brad Hayes, senior manager for the first-phase contractor Sellen Construction, were also on the panel organized by the Commercial Real Estate Women Network.

The three towers will face different directions to preserve views and create ground level green spaces that are inviting to employees and passersby, Savo said.

Amazon already occupies more than two million square feet in South Lake Union but wants to expand and create a mixed-use neighborhood for its headquarters. Nearby parks and more than 1,600 apartments that are planned over the next few years drew the company to pick Denny Triangle. The three blocks today are home to low-rise buildings and parking lots.

The first block will involve excavating 250,000 cubic yards of dirt for six underground stories of parking, Hayes said. There will be a 37-story office tower and a meeting facility.

At the peak of construction, there will be 650 workers on the site. 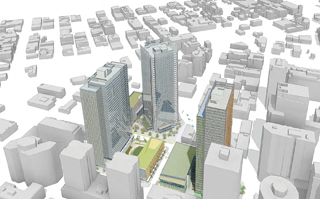 Overall, the project is expected to create more than 5,000 construction and design jobs, Savo said. As many as 12,000 people could work in the three buildings.

Savo said the new headquarters will create more than $180 million in economic benefits.

“It's the opportunity of a lifetime,” said Savo.

Amazon will help with several other projects for the neighborhood:

• Seventh Avenue will have a cycle track, which is a lane for bikes separated from cars and pedestrians.

• Amazon will fund a fourth streetcar for 10 years.

• Lenora between Seventh and Westlake will be a “shared-use street” that gives preference to pedestrians over cars.