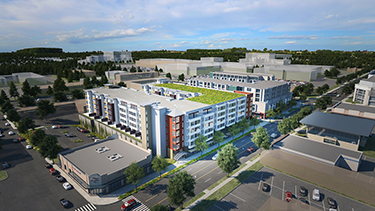 As a property buyer, Kevin Wallace said he looks for shopping centers that are diamonds in the rough.

Some may not be beautiful when he finds them, but Wallace makes it a goal to do the improvements necessary to draw customers.

“We improve the look of shopping centers to make them more attractive to shoppers,” said Wallace, president of Wallace Properties of Bellevue.

A focus of Wallace Properties in recent years has been the Northgate area.

“The future of Northgate is exciting, with the transit center and the light-rail station planned for 2022,” said Wallace. “There are already great urban amenities there.”

“We’ve been active in that market for at least a decade,” said Wallace about Northgate.

Wallace Properties is involved in broker services, as well as property management and acquisition. Its portfolio incudes industrial properties.

After the credit crisis of 2008 and 2009, Wallace said he sensed there would be a turnaround soon and was willing to bet on the turnaround.

“We were one of the few companies that continued to build during 2010,” he said. “We stayed the course and benefitted from it. The apartment market is one that had the least impact by the recession. A lot of that was homeowners who were driven back to the multifamily market.”

“One of the things we pride ourselves on is our knowledge of all the markets around the state and our ability to deliver results for our investors.”

He said prices are high now in the multifamily market, in terms of potential developments for purchase. “In most cases, the returns on those assets, given the purchase price, is lower,” he said.

While Wallace said he remains bullish on the economic turnaround and is actively looking for new projects, there are two main concerns on the horizon: the state Legislature’s inability to pass a transportation package and Boeing’s future decisions for assembling planes in the Puget Sound area.

A major decision by Boeing to move some of its operations out of state would have a ripple effect beyond just Everett and Renton, he said.

“When you’re looking at a company like Boeing, there’s not a safe place from a drastic decision by the company.”

And a transportation plan is essential, he said, for the state. A lack of transportation investment constrains the ability of businesses to grow, he said.

Still, although he described the recovery as sluggish in terms of job growth, Wallace said there are many strategic opportunities to be found. “We’re very enthusiastic about the future prospects for the region.”