Images by SKL Architects and Graham Baba Architects [enlarge]
Chophouse Row will have office space, housing and six “highly curated” retail tenants. Office tenants can join a club that will provide shared meeting rooms, a cafe and a living room.

Hey, mixed-use developers, Liz Dunn has some advice for you: Put more thought into your retail.

Dunn is the force behind some of Capitol Hill's most extreme retail makeovers, including Melrose Market and the Piston & Ring and Pacific Supply buildings. All three early 20th-century structures went from industrial eyesores to one-of-a-kind neighborhood fixtures filled with restaurants, shops and people.

Agnes Lofts, a 24-unit apartment building she completed in 2007, has a street-level restaurant and co-working space in the basement.

Dunn credits a lot of that success to the decision to fill spaces with local businesses that neighbors will welcome.

“We made some sacrifices on rent to get the right retailers in,” she said in an interview with the DJC.

Developers make a mistake when they go with ho-hum national chains just to goose the cash flow.

“No one wants to live above a bank branch or a tanning salon,” Dunn said. “Most developers, if they were smart, would use retail as a loss leader.”

Hot neighborhoods like Ballard, Columbia City and Capitol Hill's Pike-Pine corridor attract people because the streets are walkable and there's a lively mix of bars, bistros and boutiques. Developers who build in such places without regard for what makes them popular are hurting the value of their projects — and the neighborhood — in the long run, Dunn said.

Her newest Capitol Hill project is a five-story office and residential building called Chophouse Row. It will have six “highly curated” retail tenants, she said, in spaces that average about 900 square feet.

The site is at 1424 11th Ave., just south of East Pike Street. Storefronts on the lower level of the new structure will line an alley off the east side of 11th, and connect with Dunn's Piston & Ring Building on 12th.

Heartland LLC is Dunn's capital partner, and HomeStreet Bank is the lender. 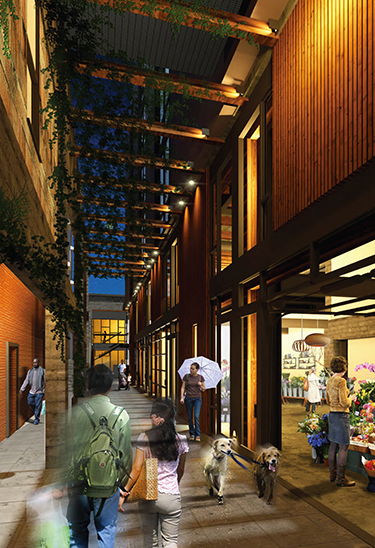 [enlarge]
Storefronts will line an alley that connects with another Liz Dunn project, the Piston & Ring Building.

The project, which also incorporates a former band-rehearsal building, is on track to open by November. Dunn said she will announce some of the retailers in the coming weeks.

The offices on the upper floors will include a “club” where members can share high-tech meeting rooms, working space, a cafe and living room.

Dunn said she sees the club as a way to provide smaller firms with affordable access to conference space.

Three residential units are planned for the top floor.

In remarks at a recent Commercial Real Estate Women luncheon, Dunn said her project and the Bullitt Center are among the first new office projects on Capitol Hill in decades. She said the office spaces will bring more daytime activity to Pike-Pine, which is better known for its robust nightlife.

Spotting opportunities that others have overlooked is part of Dunn's recipe for success.

With projects such as Chophouse Row and Melrose Market, Dunn looks for what she called “ugly-duckling buildings that have great bones.”

She said she doesn't consider herself a preservationist per se, but her projects have resuscitated tired buildings by adding floors, inserting windows, opening up interiors and enlivening storefronts.

Dunn said her properties have become more profitable over time.

“The rate of return over the long term has been quite healthy,” she said.

But lenders aren't lining up around the block to fund small infill projects. Dunn said she would like to see more “locavore” investors who are interested in cultivating neighborhood-scale developments.

She's working with Jim Reinhardsen, principal of Heartland LLC, to build an investment platform that brings together developers and smaller investment partners.

Reinhardsen, reached between meetings, was unavailable to discuss his plans, but said his firm had “a real interest in investing in projects like (Chophouse Row).”

Dunn said she thinks the city of Seattle could also do more to encourage smaller infill developments by eliminating parking requirements, raising floor-area ratios on smaller lots, and reducing the cost burden of infrastructure.

Capitol Hill's popularity with larger developers such as AvalonBay, Wolff Co. and Alliance Residential has pushed up land costs, leaving Dunn to look at other neighborhoods for her next project.

“I don't have the resources to outbid developers from Arizona with massive equity funds,” she told attendees of the CREW luncheon.

She told the DJC earlier that it's too soon to discuss what she's planning next, but her track record suggests she's keeping an eye out for the next diamond in the rough.